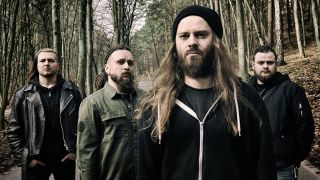 Hi! I’m Ben Sutherland, I play guitar in Harbinger and have an unhealthy obsession with Decapitated. When Metal Hammer asked me to choose my ten favourite Decapitated songs, the first thing that came to mine was “Just ten? And I have to put them in order?!” This turned out to be a very difficult task indeed, so here’s Ten Decapitated Songs That I Fucking Love In A Rough Semblance Of Order. Here we go!

“I wanted to include this on the list because even though I haven’t heard the new album yet (it’s due for release in the UK on July 7), I love the way the record is sounding from this track alone. The guitar tone is awesome (as we’ve come to expect from modern Decapitated releases), and the structure of this song shows how over the years they have become masters of tension and release in music. When that intro riff kicks in you’re banging your head and we all know it.”

“I included this because even though I didn’t get into Winds Of Creation as much as their other albums, this song is a standout for me. The guitar-work is awesome, and I’m pretty sure the opening riff is impossible to play on guitar! Another cool piece of trivia about this record is that when they recorded it Vogg was 17 and Vitek was 15. I can’t imagine being that proficient at an instrument at that age, let alone writing an album that influenced so many bands! The guitar solo in this song is also one of the most memorable Decapitated solos.”

“Even though Blood Mantra was an awesome album, it split fans of Decapitated into two camps – people that couldn’t accept a change of sound, and people that love a goddamn riff. I am certainly in the second camp, and the part at 1:46 secured this song’s place on the list. Even though BM isn’t my favourite Decapitated album – the rest of the list will help you guess which ones are – this is still a standout track in Decapitated’s catalogue.”

“Pest is one of those tracks where you can feel an artist’s influences living through their music. In this one, Vogg is channeling the spirit of Lord Dime and it has never been so satisfying. Check it out if you don’t believe me!”

“In an album filled with absolute bangers, it was difficult to choose which songs to include. This list almost reads like a Nihility track-by-track review, but Mother War has always been a favourite of mine from this album. This track grabs you by the balls and doesn’t let up until Vogg is done riffing you into oblivion. For a slam riff to put genuine slam bands to shame, see 3:00.”

“This song is a lesson in machine-gun-tightness. The intensity doesn’t let up for the first three minutes of this song, and when it does it only lulls you into a false sense of security, as the rhythmic displacement in the last section gives the ending this chaotic-yet-under-control vibe that I feel Decapitated have mastered.”

“The title track of Nihility is a masterclass in writing technical riffs with catchy melodies. The track is chock-full of odd tempo changes, but if you ask any Decapitated fan to sing you a riff from this track they will be able to. Masterful songwriting that influenced a whole genre of bands.”

“The album version of this song is a journey from a beautifully dark guitar soundscape to soul crushing riff and back, many times over. At almost nine minutes long, this song is one to get lost in. The most memorable part of this song though is the single chord main riff. So many bands have tried to capture the same atmosphere with that classic ‘one chord played offbeat’ method, but nothing sounds quite as heavy as in this song.”

“Another song that any Decapitated fan will know – I think mainly for the drum solo! While Organic Hallucinosis doesn’t give me the same buzz as Nihility does, this song always gets me pumped and I think this is a contender for the grooviest Decapitated song – perhaps just in front of Eternity Too Short from Nihility. This is also the last album to feature the late drummer Vitek, and truly stands as a testament to the phenomenal ability he had at such a young age. RIP.”

“It just has to be number one doesn’t it? This song is fucking awesome and we all know why. This death metal anthem is the song that introduced a lot of people to the band, and when you listen to Nihility in full that main riff kicking in after the chaos of Names makes you want to lift weights and punch babies at the same time. Essential listening.”

Harbinger’s new EP Human Dust is out now via Basick Records and is available to download from iTunes. Check out their new video for End Of Time.