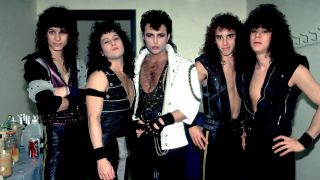 Superficially, such an implausible blend looked fated to fail in an embarrassing pile of discarded denim, synthesisers, overblown ideas and incomprehensible time signatures, but there had been encouraging precedents.

It was easy to argue that much of Led Zeppelin and Deep Purple’s 70s output had been progressive in nature – and you couldn’t cite finer metal influences than those two bands, right? But were the devoted new metalheads even capable of equalling the complicated and extravagant musical ramblings that Genesis or Yes had produced in their heyday?

Worryingly the clowns were deadly serious. Proudly professing a love of Iron Maiden and Rush, and often with a classical training behind them, the effect was startling. An implausible style of metal was spawned.

With the term ‘prog metal’ being reserved by the genre’s compulsive fans for bands who were deemed worthy enough to have the tag bestowed on them, it soon became apparent that there were certain unofficial criteria that needed to be met for entry into their exclusive club.

For starters, somewhere in the band’s back catalogue needed to be a full-blown concept album – and preferably one with an intricate and vague storyline dealing with conspiracies, reincarnation, or blood-curdling supernatural forces.

In interviews, the band needed to be able to examine in minute detail the influences that Metallica, King Crimson or Judas Priest had on their lives and music, and be equally adept at explaining to the musos in their audience the complexities of chord inversions. Oh, and being huge in Japan became essential.

By the mid-80s, the likes of Fates Warning and Queensrÿche had taken the lead, and with albums such as The Spectre Within and The Warning respectively, critics began to take notice, labelling the music of these new bands the “thinking man’s heavy metal”. And with Dream Theater and Savatage being encouraged by Queensrÿche’s success, and even Iron Maiden probing the more conceptual approach with Seventh Son Of A Seventh Son, there could be no turning back.

With Queensrÿche having escaped from the NWOBHM influences of their early recordings, Operation: Mindcrime was a prog-metal zenith. Arguably metal’s first ‘headphones album’, it had a cinematic approach, with sound effects and dialogue enhancing a bonkers plot involving political revolution. Far less convoluted than it may sound, songs such as the dynamic Revolution Calling and the fist-pumping Eyes Of A Stranger helped define prog-metal.

Dream Theater had already established their prog-metal credentials with 1992’s Images And Words (which even generated an improbable hit single in Pull Me Under), but it was the full-blown concept album Scenes From A Memory that captured the essence of their sound.

Demonstrating an astounding level of musicianship, the 74 solid minutes of elegant, interwoven melodies remain inspired to this day. The rampant instrumental Overture 1928 informed bandwagon jumpers that imitation was futile, while the lilting Spirit Carries On proved they could do balladry as well.

Fates Warning’s debut Night On Brocken was heavily influenced by Iron Maiden, but by the time of 1985’s The Spectre Within and, more noticeably, with Awaken The Guardian they had successfully added a stinging progressive edge to their sound.

They may have lacked keyboards, but that didn’t prevent them from creating a dazzling variety of sounds on tracks such as the compelling Fata Morgana and Arcana. Yes’s space-cadet lyricist Jon Anderson may have been the only person capable of deciphering lines like ‘Mystic journey to Arcana travel starry spheres in trine’, but despite such absurdities the …Guardian album remains their best.

Unless you were into church infernos and inverted crosses, Scandinavian metal was too often a derivative and awful mess before Pain Of Salvation stumbled onto the prog-metal scene in the late 90s.

The Perfect Element was the first of their albums to deliver the polished elegance that previous records had only hinted at. With Daniel Gildenlow’s unique voice and music that encompassed some of Dream Theater’s technical wizardry, songs such as King Of Loss and the marathon title track splattered you with gorgeous tunes and ever-changing time signatures. Stunning.

When Tool came along in 1992 with Opiate, their genre-busting alternative approach to prog-metal confused matters. Delving into and remoulding such diverse influences as King Crimson and Nine Inch Nails to create a shadowy, experimental sound, their impact was immense, even though they firmly denied that they were prog-metallers.

Aenima, from 1996, is often heralded as Tool’s defining moment, but the progressive complexity of Lateralus gives the latter an edge. With forceful instrumental passages and hate-fuelled lyrics, Tool attracted as many Marilyn Manson fans as they did Robert Fripp lovers.

Mastodon may well often be seen as part of the New Wave Of American Heavy Metal, but they’d struggle to deny that their masterpiece Leviathan is prog-metal.

For starters, this is a concept album based on Moby Dick – and you can’t get more prog than a 46-minute piece about a whale. Musically, in places it bristles with layered, indulgent melodies that verified the band’s self-confessed devotion to King Crimson, Genesis and… er, Camel; their harsher material, such as the grinding opener Blood And Thunder nods at Metallica. The impact of this outstanding album will only be truly appreciated in years to come.

Angra’s prog rock credentials had been recognised on their 90s albums such as the cutting Holy Land, but it wasn’t until the band split into two factions (the deserters formed Shaman) that they beefed up their sound with an almost speed-metal ferocity that shot them into the prog- metal genre.

Singer Edu Falaschi (who replaced Andre Matos) may have had an aura of a Bruce Dickinson clone, but his voice was more alluring that his predecessor’s wheezing. Throwing a ludicrous mix of influences – soaring orchestral passages, splashes of Latin, widdly-widdly keyboards – into Rebirth, they came up with a remarkable album.

Still revered and mocked in equal measure for their 1991 rock ‘opera’ Streets, Savatage peaked a couple of years earlier with the polished and robust Gutter Ballet.

More coherent and without the cringe-inducing narrated sections that blighted the grandiose Streets, the diversity of material on …Ballet was staggering. The title track featured an assortment of melodies, and the band’s heavier tendencies showed on She’s In Love and the explosive Of Rage And War. If Pink Floyd in their adolescent years had been inspired by metal instead of psychedelia, this is what they would have sounded like.

Although the dodgy lyrics tie together a tenuous concept revolving around an advanced Atlantis civilisation nearly annihilating the globe, musically V… was a formidable album. So forget the song titles like The Bird-Serpent War or On The Breath Of Poseidon that smack of Harry Potter, and instead revel in the intensity and overblown symphonic splendour.

There isn’t a feeble track on the album, and the elaborate interplay between instruments is dazzling. Singer Russell Allen had a far more palatable voice than the ‘acquired taste’ of many contemporaries, and this enhanced the band’s appeal.

The guttural vocal style of Mikeal Åkerfeld on Opeth's early works ensured that they were often mistaken for a pure death metal band, but their 2001 album Blackwater Park had a deep, progressive vein that made it an almost unbelievable hybrid.

Using an outside producer for the first time — Porcupine Tree's Steven Wilson — it was a multi-dimensional affair and a genuine landmark recording. "What I hope we achieved with Blackwater Park," says Åkerfeld, "was to open up people’s appreciation for music." They succeeded.