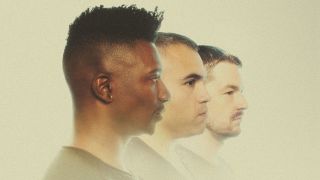 Guthrie Govan’s probably my favourite guitar player!” Tosin Abasi almost surprises himself with his enthusiasm. The two players toured together last year as part of Joe Satriani’s axe-fest, the G4 Experience. “I think Guthrie’s the perfect electric guitarist, the guy can do no wrong. He’s charming, witty, happy to have a beer and a chat, but there’s a crazy contrast between his down-to-earth personality and his monstrous playing. I feel grateful that Guthrie Govan exists and is playing now.”

We’re in Cologne. In a few hours, Abasi – currently the hottest guitar player in prog metal, maybe even rock as a whole – will take his Animals As Leaders on stage for their headline set at Euroblast, one of the continent’s biggest tech metal festivals. Just before soundcheck, he’s pondering some of the finer things in prog, Guthrie Govan among them. As a kid growing up and learning his chops in Washington DC in the 90s, Abasi was less about Yes, more about Candiria and Between The Buried And Me. “I know they’re not traditional prog, but in terms of musical complexity and scope they were doing a lot of stuff that impacted on me as a younger player.”

As did Allan Holdsworth. His album I.O.U. opened up another plane of musical theory to Abasi, leading him to enrol at the Atlanta Institute Of Music for a year. Mention of King Crimson hits a bit of a nerve, too. “That’s a strange one for me,” Abasi admits. “There were things I was trying to do musically before I heard of them, then a friend turned me on to them and I thought, ‘My God, these guys were doing this decades before I even started!’”

“A lot of people have related us to Crimson,” adds Javier Reyes, Abasi’s co-guitarist in Animals. They grew up together in DC, bonding over a mutual favourite, Dream Theater. “It’s because we are part of that prog world. I grew up listening to Rush – I’d play YYZ at school assemblies, and while I’m not a huge fan I know how significant they are, and classic bands like Yes, Kansas and Styx too. But often bands who call themselves prog sometimes try to make sure that this song’s in 7⁄8, that song’s in 5⁄8. We’re trying to be more groovy and keep your head nodding, and at the same time include all those concepts that make prog what it is. It may be a little bit much for ‘traditional’ prog fans, but they’ll hear us and understand there’s a prog thing happening.”

Lest we forget, Animals’ third album The Joy Of Motion was very nearly a Top 20 hit in the States two years ago. It reached a respectable No.23 on the Billboard 200 and cemented their reputation among the prog metal and guitarist communities. It’s typical of the band – a musically complex, deeply virtuosic display of muso brain and metal brawn. Hard to believe, but Javier Reyes considers it slightly formulaic. “It was, in terms of the song structures. Our approach was to stick close to pop song lengths, around four minutes. But on the new one we have songs that are seven minutes long, and we approached it as a more theatrical album. We said, ‘Let’s get nerdy, let’s go prog, let’s make tons of parts.’”

The new one, The Madness Of Many is another overwhelming listen – intelligent music with the cerebellum of math rock and the swinging balls of a Meshuggah, with a groovy prog metal panache that’s all Animals’ own. Abasi and Reyes’ duelling seven- and eight-string guitars provide interlocking top lines and a ton of bass buzz between them, with plenty of melodic hooks, crunchy tonal textures and rhythmic chicanery too.

“There’s less distinction between Javier and my roles now,” Abasi says. “We’re sharing more, that middle space is going. We’ve known each other over 15 years, we come from the same town, and have a similar musical value system. If I write something super complex, he knows how to fill the space. He’ll understand foundationally that he may need to play something a bit more simple to complement the complex part. I have a lot of techniques like thumping, tapping and hybrid picking, which a lot of electric guitarists wouldn’t be comfortable with, but Javier’s able to jump onto any way I choose to produce notes. All those things have made it a perfect combination.”

Their 2009 self-titled debut album was a de facto Abasi solo project, but since then the band has evolved, and Abasi says the music on The Madness Of Many is their most collaborative work to date. “The material is the result of where we are today as musicians, individuals, and as a band. The first four tracks are the most synergistic representation of the three of us combining our musical input.”

Opener Arithmophobia started life as a rhythm track that drummer and final third of the trio Matt Gartska brought to rehearsal. Adding the melody to this pre-existing rhythm was a new one on Abasi and Reyes. It changed their writing style, with compelling results. “We were crazy not to try that before,” says Abasi. “I called it Arithmophobia because it’s so complex that it could even give you a mortal fear of numbers!”

For an instrumental band, cool songtitles are invaluable. They considered the state of the world politically and environmentally, and meditated on the vibe each song gave them. Taking its name from the morbid fear of infinity, Apeirophobia comes complete with a cycling arpeggiated part that you can imagine looping forever. The dark Ectogenesis refers to something grown outside of the body. Backpfeifengesicht borrows perhaps the best word in the German dictionary, roughly translating as ‘a face asking for a slap’ (think Trump, think Piers Morgan). “I was interested in words that could only have meaning in their native language with no equivalent outside it,” says Abasi. “I wrote the demo for that one around a year after the first Animals album, so it represents some of the riff-oriented metal stuff we did. It’s aggressive so we wanted an aggressive name.”

The most immediate piece, The Glass Bridge evokes the long transparent crossing over the Zhangjiajie Grand Canyon in China, which opened briefly in August only to be hastily closed for repairs. Abasi saw a video of people terrified to cross the bridge. “It’s a strong image – the fact that even though you know you’re safe, even though rationally you know it’s okay, you can’t get past this reflexive fear, it’s hard to push your body to move.”

Reyes’ parents moved to DC from El Salvadór. He’s a lifelong fan of classical and Latin American music: Paco De Lucía and Al Di Meola, Los Trios Panchos and old master Agustín Barrios Mangore. This brings a refreshing tonal change to Apeirophobia and the classically-inflected The Brain Dance, wherein the guitarists wail on seven- and eight-string acoustic, nylon-strung guitars. “We’re all happy with how Brain Dance came out,” Reyes says. “It sounds different than anything else we’ve done – it’s a new side to what we can do. We changed the way we approached parts. I wrote a lot to Tosin’s parts. Before, we had more parts written together. This time there’s two different guitar parts all the way through a chunk of the album.”

All the band are currently into Armenian pianist Tigran Hamasyan and Melbourne’s proggy neo-soul outfit Hiatus Kaiyote. When Abasi’s not rocking out he listens to electronic music – Machinedrum, Misanthrope – and (whisper it) RnB.

He’s come a long way in just over a decade. Back then he was cleaning up dog crap at a DC pound and even worked at an Alaskan fish cannery to earn enough for his own Ibanez Jem, Steve Vai’s signature guitar. Today his reputation as a pioneering guitarist flourishes. He’s added a bit of style to guitar mag covers, he’s played that G4 tour, and Vai has since become a mentor and a friend, inviting Abasi onto his 2016 ‘Generation Axe’ tour along with Zakk Wylde, Yngwie Malmsteen and Nuno Bettencourt. He learned a lot about how the previous generation does things. “But the most valuable stuff wasn’t about their tone and their rigs, but their insights into the business. I was hearing very personal, real experiences these guys have had, and it gave me a vast appreciation for them as musicians. There was a level of rock stratosphere on that tour that I don’t think I’ll ever reach, because things have changed so much. Rock was in a different place then, the dynamics of music are changing. It’s unlikely I’ll ever play arenas – what I’m doing is so niche.”

It is, but in that tech metal/prog metal/djent niche Animals are right up there, and their fanbase is growing. Music’s equation is changing, and requires new algorithms. The band don’t measure their success by anything as antiquated as album charts, but rather by bodies at shows, their Facebook page (2,000 more ‘likes’ per week and counting) and Instagram followers. New ways for new days.

“We always wanted the band to get bigger,” says Abasi, gearing up for showtime now. Today the guitar he reaches for is his own Ibanez signature model, the TAM100; no shit-shovelling required for this one. “But I never thought it’d get as far as it’s already gone. I’ve always resonated with challenging, aggressive music, and there seems to be a renaissance of bands doing the most they can musically. Metal’s always been multi-dimensional, and whatever you want to call what we’re doing, we’re connecting with the people who authentically care about this music. That’s more important to me than having a larger audience who don’t feel as strongly.”

With that he and Reyes say their goodbyes and are off, to thrive on the sanity of few.

The Madness Of Many is out November 11 on Sumerian. See www.facebook.com/animalsasleaders for more information.