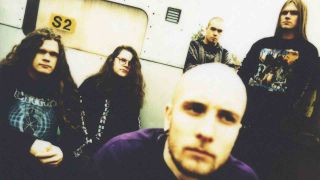 Formed in 1987 and named after the Yiddish/Hebrew word for ‘crazy’, Meshuggah hinted at a taste for the challenging and the off-the-wall from the very beginning of their existence. Spawned from the more progressive end of the thrash movement, the Swedes’ 1989 debut release, a self-titled effort also referred to as Psykisk Testbild, drew heavily on the genre while demonstrating many forward- thinking touches. Following the addition of new drummer Tomas Haake, the band’s first full-length, Contradictions Collapse, released in 1991 via Nuclear Blast, further highlighted the group’s technical and progressive ambitions while retaining a noticeable inspiration from Bay Area thrash bands such as Metallica.

It was this progressive streak that would soon come to the fore, the group evolving into a full on, polyrhythm-packing, technical and experimental metal outfit. A significant turning point came in 1992 when vocalist and guitarist Jens Kidman put down his guitar to concentrate on vocals and the band brought in a new member, Mårten Hagström, a guitarist who had played with drummer Haake for some time in an underground thrash band known as Barophobia.

“Me and Tomas knew each other since we were six,” explains Mårten, “and it was always me writing the songs. I think that’s one of the reasons I came as a natural choice – I played with Tomas already, I knew the guy a bit, and on top of that they knew what type of music I wrote, because they heard the demos from the band we used to play in, so they knew what they were buying into.”

The fact that the band were aware of Mårten’s writing style was a crucial point since they were not only encouraging him to compose, they were actually insisting upon it. From this point on it was inevitable that the band’s sound was going to shift somewhat, due to the new axe-slinger’s unwillingness to conform to the past.

“When they asked me to join Meshuggah they stressed that they wanted me to write as well, so I immediately knew there would be a difference [in the band’s sound]. There was no way I was going to come in and replicate what they had been doing on the first album; I wanted to do what came natural and I guess that’s what they wanted me to do as well. Pretty early on it felt like we were lifting it out of the pure thrash elements that were used on the first album. It felt less inspired by other bands and more inspired with what we could do with our sound, so I guess that triggered us to do a lot of different stuff. There was no criteria as to how it was supposed to sound – it was just to make a cool statement.”

The first result of this rejuvenation was 1994’s None, a stellar 33-minute EP. Pushing the technical and the inventive, the EP proved to be something of a stepping-stone between the earlier recordings and 1995’s Destroy Erase Improve, the band’s second full-length and an undeniable milestone for the group. In fact, the connection between None and Destroy… runs far deeper than it might first appear – as Mårten explains, the existence of the former directly affected the nature of the latter, both coming as a result of label interference.

“That’s something that’s kind of weird,” he ponders. “Some of the stuff released on the None EP was actually written later than on the Destroy… album. When we were writing None we thought it was going to be the full-length, but then Nuclear Blast said, ‘You’re going to release an EP first’, so we prioritised the songs we thought would do well in that format. We were kind of surprised by the decision at the time and we didn’t think it was very smart. At the same time it bought us time to do things properly for Destroy… – we had a lot of material to choose from, there were a lot of leftovers from Contradictions Collapse and None. Nowadays that doesn’t happen just because we use most of the material on each album.”

The years prior to the album had been a turbulent time indeed. On the one hand the band had released None and another EP entitled Selfcaged. However they had also suffered two setbacks in the shape of grisly workplace accidents, guitarist Fredrik Thordendal cutting the top of his finger off while working as a carpenter and drummer Tomas Haake trapping his hand in a lathe.

“We just had two really big scares there,” explains Mårten. “We had a lot of other shit going on at the time too. The basement where we rehearsed got flooded and some of our equipment we just had to throw away, there was a lot of bad things happening around the band. You’d think having all that shit happening within a limited space of time would affect the band negatively, but I can’t really remember that anyone was feeling beaten by it. We just thought, ‘Shit happens, let’s go!’”

It was this can-do (or perhaps ‘can-do- anything’) attitude that characterised Destroy…, an album which pushed metal into unexplored places with little regard for the consequences. Overwhelming the listener with a precise and rhythmic assault, it had some parallels with Fear Factory’s Demanufacture, released the same year, but instead of industrial influences utilised the sort of complex drum patterns and difficult time signatures rarely heard in metal at that time. Less of a masterplan on any individual member’s part, the move appears to have happened largely by chance while the bandmembers were writing.

“Why it turned into that technical thing I don’t really know,” Mårten admits. “The simple answer is that we were attracted to quirky stuff in music since we were kids – anything that was experimental, that was new, something you hadn’t really heard before – so that’s what we pursued. There’s a lot of music that’s been inspirational but to try and pinpoint the music that inspired us to make this album, well, it was probably us. And not so much musically, but just being in the environment we were in, feeling we had a bit of a higher purpose than before.

“Paradoxically we had a lot tighter reins, and at the same time more freedom, so it was an exciting mode to be in. We wanted to sound really aggressive, it was one of those general outlines – it’s gotta be powerful, it’s gotta be precise, but it’s got to be rowdy, because that’s something we maybe found on None which was very much that clean thrash metal sound. We wanted to roughen it up a lot, we knew we needed to make the sound more raw than before but still keep that power and precise feeling to it. That was the challenge.”

Another important factor in the realisation of the album was the choice of producer Danne Bergstrand. Just as the band were consciously taking their music away from any outside influences, so too was it the case with the production, a situation that suited Danne’s laidback approach perfectly.

“It was quickly obvious that we thought about stuff the same way as Danne, about how it was supposed to sound and how things should work together in a general way. We’d had producers on earlier albums and there always came a point where they wanted a say in something that had to do with the structure of the music, and we were like, ‘No, it’s going to be this way’.

“So working with Danne was really liberating because he was just tech-nerding with Fredrik about whether to use this or that on this channel, and how to cut this piece to that piece, and a lot of technical stuff. Studio work basically; engineering. Having that down with a guy who knew so much about how we wanted to sound meant we could just concentrate on how to get the songs across right. That experience made us realise that we are supposed to do this ourselves, we are supposed to be in the driving seat.”

It was perhaps just as well that the band were saved some stress in this department since elsewhere pressures were high, most specifically in terms of deadlines, the band underestimating the amount of time needed, booking six weeks in Soundfront Studios in Uppsala, a city some eight hours drive from where the band were based. Constantly pressed for time, the band also found themselves pressed for space, sharing a small cabin outside of the studio for the six-week period of the recording. Despite the inevitable stress that such constraints necessitated, the experience proved to be surprisingly positive.

“We’d been on the road before, but not for that long, so in that respect it was the first time we had to bunch together and deal with each other for six weeks straight. Nothing bad came out of it though, it was only positive. We kind of got to know each other to a point where we could work on an even more focussed level. I guess it was pretty disciplined. When everybody’s fired up about reaching a certain goal, everybody takes responsibility for getting things done. We had a rotating schedule and I’d say that we had a fair amount of stress, but we just didn’t sleep much and rode out the storm.”

Still considered to be one of the band’s finest efforts, it’s amazing just how fresh Destroy Erase Improve seems today, its powerful sound showing little or no signs of dating. And while Mårten is keen to highlight the equal importance of None, he also acknowledges the pivotal nature of the full-length, explaining that the band were somewhat conscious of its ground- breaking nature even at the time.

“All of a sudden we were writing some- thing that felt fresh; we felt something was changing, that we were changing for the better. Thomas was dealing in the lyrics with human shortcomings, so the album’s title alluded both to the lyrical content and the fact that we’d destroyed the old way of working and started on a clean slate. Destroy, erase, and then improve what we can pick out of the pieces!”