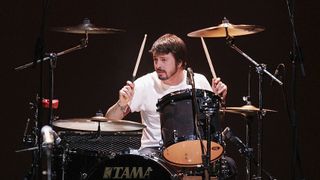 Dave Grohl may have fronted Foo Fighters for some 22 years now, but, given half the chance and you’ll hear him hammering his kit on a long list of other band’s music.

Over the years, he’s appeared on releases by Queens Of The Stone Age (Songs For The Deaf), Killing Joke (Killing Joke), RDGLDGRN (RedGoldGreen) and most recently, Ghost (If You Have Ghost EP). Years before he invited Trent Reznor to collaborate on Mantra, the closing song of his 2013 Sound City: Real to Reel soundtrack, the pair first worked together on Nine Inch Nails’ album, With Teeth.

“I get bored easily,” Dave told Billboard magazine, “but I like to think I’m selective.”

Reznor has tended to be something of a one-man band in his studio albums, which typically emerge about every five years. But 2005’s With Teeth, the follow-up to 1999’s The Fragile, was hailed as his most refreshingly straightforward record since Pretty Hate Machine, released a decade earlier. And the reason is not only a relative lack of programming and synthesisers but the presence of ‘real’ instruments – guitar, bass, piano and, of course, Grohl’s so-distinctive drums.

Reznor, as usual, played most of the music himself, but planned to bring in members of the latest live Nails line-up to give the human touch he desired. He found he kept asking drummer Jerome Dillon to play like Grohl, whom Reznor had met at a festival in Australia some years earlier.

“Finally I thought, ‘Why don’t I just call Dave and see if he’d do it?’ A few days later we were in the studio.” The experience proved a pleasant one. Importantly for Reznor, Grohl proved “a really nice guy,” but, more importantly, “as a musician he brought an understanding to the material.”

The main reason why real drums were used on this record, as opposed to programming, was the unpredictability factor: “I want the excitement of when you have an exciting guy playing an instrument. It takes it up a notch.” A by-product of the recording process was that each song on the album was laid down with live performance in mind: all could be played by the current tour line-up without reliance on pre-recorded backing tracks.

“There is a much less refined approach to most of this record,” says Reznor, “and I wrote a lot of the tracks envisioning powerful live drumming – enter Dave Grohl! Working with him has been one of the most inspiring and exciting experiences I’ve had in the studio. The tracks he’s played on have come alive in a ‘better-than-I’d-even-hoped-for’ type of way.”

Grohl was amazed that this was Reznor’s first new studio record in five years. “I looked at him and said, ‘What have you been doing?” When he entered Sound City Studios in Van Nuys, California to pound out the backing tracks, the upcoming album was entitled Bleed Through, and was also scheduled to be a concept epic. “But about five or six songs into writing it, the songs started to sound good on their own and they didn’t need this framework to work together,” Reznor reveals.

“I took a moment to be editorial and say, ‘I think it’s an unnecessary idea,’ and it wasn’t out of laziness. It felt like this is going to be a collection of songs that are friends with each other, but they don’t have to rely on each other to make sense.”

Though Reznor had always produced his own material in the past, he decided to get Rick Rubin involved in the production. The man who once masterminded the Red Hot Chili Peppers’ commercial breakthrough had more recently worked with the late, great country legend Johnny Cash, whose version of Reznor’s Hurt has been acclaimed as a classic. Rick was at one point announced as the new project’s producer by Rolling Stone magazine, but in the end was used as a sounding board, Reznor sending him mixes until he gained enough confidence to dispense with such outside guidance.

“I wasn’t against any ideas Rick had, it was just every cell in my body said ‘do this record how you would do it’. I didn’t feel short of ideas and I felt like I had a plan and I don’t need it approved by anybody. Rick was cool about it. It was just the natural progression of the record.” And there was no doubt of Reznor’s productivity: along with the 13 released tracks, the sessions yielded a further seven songs which may yet see the light of day.

Immediacy was the key: Reznor forced himself to write two songs every 10 days, and they were recorded even more quickly. “If I come up with rules or limitations it focuses me in a direction,” he explains. “And those rules can change if you realise it’s a dumb idea. You start to mutate it to see what fits best. In this case, one of the early concepts was I wanted it to sound ‘played’. Not like a garage band, necessarily, but with computers it’s easy to fix things and make everything perfect, and sometimes you can lose an element of humanity and imperfection. The message emotionally was to be a bit frail and unsure of yourself, so we treated things as performances.”

One unexpected by-product of Dave Grohl’s involvement was the presence of piano on nearly every track. “When it came time to pick the best of the best and arrange them in the studio,” Reznor explained, “I found a lot of the space the piano took up sat nicely. It was an odd sound with violent live drums and this cold, brittle environment of a piano to anchor everything together.” But it worked.

After the album opened with All The Love In The World, its electronic drums more typical of past NIN music, Grohl’s role in pushing the band’s new hard-rocking approach became evident on You Know What You Are and The Collector. When he promised via the NIN website that the upcoming tour would ‘destroy’ audiences, this was the track that Reznor had in mind.

Reznor produced the album himself, which was then completed in New Orleans by Downward Spiral mixer Alan Moulder. The drums are prominent in the mix, giving full rein to Grohl’s very distinctive style. The title track is the longest song on the disc, Grohl hammering home a simple yet effective chorus that stays in the head. Love Is Not Enough is another rock song built on a percussive foundation whose complex beat is reminiscent of I Do Not Want This from The Downward Spiral.

Reznor and Grohl seemed unlikely collaborators, but the pair are both hands-on bandleaders, used to having their own way and making the musical decisions that matter. Yet, like most drummers, Dave is able to knuckle down, take direction and revel in doing a professional job. After all, he did it to legendary effect in Nirvana, and this time, his talents helped give Nine Inch Nails’ fifth full-length effort an exciting new dimension.