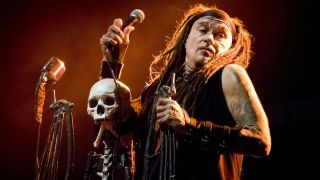 It is generally accepted – even by the band themselves – that metal/industrial legends Ministry tend to write their best material when frontman Al Jourgensen is dissatisfied with the political climate (ie whenever republicans are in the White House). Thus, during the Reagan and Bush eras (both of them) the band turned out some astonishing work, while during the Clinton era they did a lot of drugs. Let’s see if that holds true…

The first Ministry album not to feature bassist and long-time collaborator Paul Barker, 2004’s Houses Of The Molé was also the first in the band’s anti-Bush trilogy, the title of this opening track being self-explanatory, and the song itself featuring samples of then president George W Bush. It is one of only two tracks on the record that doesn’t begin with the letter W.

“Never trust a junkie!” Having spent some 18 years – not mention thousands of dollars – addicted to heroin, Mad Uncle Al knows what he’s talking about when it comes to drugs. Still, he’s written some damn good songs about it, so that’s all right then. The aforementioned quote, sampled at the start of the track is, incidentally, from Chloe Webb’s portrayal of Nancy Spungen, in the movie Sid And Nancy. She knew a thing or two about junkies, too.

The last album in Ministry’s anti-Bush trilogy, The Last Sucker was sadly also the last to feature bassist Paul Raven, who died from a heart attack a month after its release. But at least the great man went out with a bang, the thundering Let’s Go being just one of the standout tracks on an outstanding album. A storm is indeed “a brewin’”.

It’s always fun playing sample spotting on Ministry songs, and this fiercely political (or rather, anti-political) tune is no exception, containing, as it does, the instantly recognisable voice of Robert Lee Ermey, better known as the drill instructor from Full Metal Jacket. The lyrics, ‘Thieves and liars. Murderers. Hypocrites and bastards’, are not open to interpretation.

Nominated for a Grammy for Best Metal Performance in 1993, NWO is another protest song aimed at good ol’ George W, and employs samples of W robotically repeating the words “New world order”. Another sample used to great effect is that of Dennis Hopper from Apocalypse Now, shouting, “It’s all right! It’s all right!”. A masterpiece.

Way ahead of its time – this being 1988 – The Land Of Rape And Honey was vast leap forward for Ministry after their first two rather dodgy offerings, (With Sympathy and Twitch) and has been cited as Jourgensen’s favourite Ministry album. This stunning opener, an underground classic, turned up two years later in the sci-fi movie Hardware, rather bizarrely with GWAR shown ‘performing’ it.

Another one nominated for a Grammy, (Ministry have been nominated half a dozen times and still never won one) Lies Lies Lies concerns the attacks on the World Trade Center on September 11, 2001, relying heavily on quotes from the conspiracy theory movie Loose Change, which suggests that the attacks were an ‘inside job’ perpetrated by the US government.

Doubtless there would be uproar if this wasn’t included in our top 10, and rightly so. As one might expect from a song about our Lord And Saviour constructing hotrods, it is completely berserk, with Butthole Surfers frontman Gibby Haynes providing gibberish vocals – ‘Ding ding dong dong dong ding dong! Dingy dingy son of a gun!’ – and a video full of gnarly car wrecks. Fuck yeah!

In case you hadn’t got the memo by now, Ministry really hate the 43rd president of the United States, and on this, the blistering title track of their 10th studio album, they nail the point home by cut-and-pasting his speeches – “I’m a brutal dictator! I’m evil!” – before shaming such companies as Exxon and Haliburton. Imagine how good they’ll be if Trump gets in!

To be fair, there are numerous Ministry songs that could have been number one here, but So What, the eight-minute monster featuring samples from Ed Wood’s 1956 exploitation movie The Violent Years, is simply colossal, even more so on the live album In Case You Didn’t Feel Like Showing Up. Slow-burning and oozing menace, it is Ministry at their greatest.