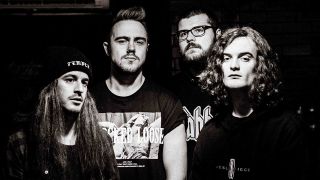 Despite only forming in 2018, Leeds hardcore quartet Cutting Teeth have already played alongside the likes of Bleed From Within and Lotus Eater, and are currently on tour supporting Black Tongue. Taking cues from US heavyweights like Converge and Every Time I Die and Canadian HC honchos Cancer Bats, these guys are on a steep upward trajectory and they show no signs of stopping.

With their new EP, Fracture / Decompose out now, we spoke to guitarist Adam Jones to find out his favourite up-and-coming hardcore influenced contemporaries.

"99% Cobra are a chaotic force unto their own. I’ve seen these boys destroy more drums, cabinets, and microphones than I’ve had hot showers! We met Cobra just over a year ago and they’ve been amazing friends with us ever since.

"They’re the perfect marriage of modern hardcore sensibilities, as well as blending it with melody and eccentric rhythms. Oh, and we got their vocalist Rob to feature on Ghost Blood from our new EP because his vocals are HUGE."

"We found out about Implement totally by accident. We were at a rehearsal studio, and we were packing up and heard these incredibly sick riffs coming from the room next to us.

"We had a little bop in the room and then knocked on the door and found out who they were. If you like awesome, groovy riffs smothered in chorus, and fast, in your face classic hardcore, this is THE band."

"We didn’t know whether to include Higher Power in this list, I mean, they’re signed to Roadrunner Records and have spent most of this year touring America! But yeah, it’s hard to be a band from Leeds and not mention them.

"They’ve been working relentlessly, touring with Knocked Loose, Angel Du$t, Vein, and doing festivals all over the place and they’re just taking over the UKHC scene. It’s great to see them at the forefront of it, and their new singles are pure bops."

"One of the best hardcore bands the UK has spawned in AGES. We found out about them when they were announced for Upsurge Festival in London and consequently listened to them, thought they were awesome and saw the David Tan live set.

"I think that set is only 15 minutes or so, but it’s just full of amazing melodies, some hard chugs, and some really sick solos. Solos are underrated and Ill Vision nail them!"

"I don’t know if we can call Loathe ‘hardcore’ because they’re covering so many stylistics with their music, but I do know that they’re one of the most exciting prospects in the UK right now.

"As a whole, Loathe are the whole package. Devastating riffs, huge drums, the insane imagery, Kadeem is one of the most captivating frontmen I’ve ever seen.

"The creativity that Loathe possess is just unfathomable and whatever they release next, I have no doubt will once again blow everything out of the water and sky rocket them."

"Another bunch of proper pals. DAO are the real deal. Jono showed them to us last year, and we’ve been hooked ever since. We met them playing 99% Cobra’s EP release show and they’re absolute animals live. Their stage presence is huge, like their bass and guitar tones.

"Here’s a band that just radiate attitude and punk energy. Their vocalist is one of the most dominant performers out there, her powerful lyrics are accompanied by equally powerful vocals to back them up.

"It’s like early Green Day played by kids that grew up on high energy New York hardcore and bands like Have Heart. Expect big things from this lot."

"Found out about this band when they were played on Radio 6 Music as well which is sick, especially for a small hardcore band from the UK. This band have it all, massive riffs, energy everywhere and the guitar tone is so sick.

"Their EP from this year is one of my favourite releases, it packs so much into such a small time but every element sticks. This is all the fun that hardcore has to offer in one place. It’s criminal that this band aren’t absolutely massive."

"Sludgy, heavy hardcore from Leeds (don’t worry, we’re nearly done with Leeds bands), think Jesus Piece meets Queensway with a bit of Bulldoze and you’re about there but the riffs are far more than just chugging.

"Tom, the guitarist, is a wizard, the new material is sounding so good as well. They’re being added to most of the main lineups in Leeds and around the country. This band are going to do big things and shouldn’t be slept on."

"Death Metal infused crusty Hardcore from Leeds. Alongside the aforementioned Greed, they’re being put on a lot of the shows around Leeds and rightly so. The riffs are so crushing and so metallic but with a definite punk edge.

"The barked vocals cut through so well and a reminiscent of a thrash or crossover band. This band are the definition of hard."