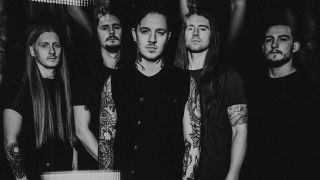 Bleed From Within have released their first full-length in five years in the form of Era. It's the first record to feature guitarist Steven Jones, who has been playing with the band for the past two years.

The new album is a solid slab of Scottish aggression and groove, tackling all the negatives that society, politics and technology bring on a daily basis.

To guide us through Era, drummer Ali Richardson has given us a track-by-track break down of the album.

"One of the first tracks we actually finished for the album. Goonzi (guitarist) sent over the intro section with the ambient build up and it immediately struck us as an album opener. When Kennedy sent over his vocal demo, the track took on this ‘call to arms’ feel that cemented its place at the start of the album. Dynamically, it sets the album up perfectly. It paints a clear picture of what to expect in the subsequent tracks. The album was almost called Clarity but we decided against it for a number of reasons – mainly because it's a horrible word to say in a Scottish accent."

"An absolute monster of a track from start to finish, with one of the album's biggest chorus sections. We finished this towards the end of the writing process – it was actually the last song before I entered the studio. We felt that we’d rushed it slightly, so were planning on making it a bonus track. Again, Kennedy went away and worked on the vocals then came back with that stunning chorus melody. The song then went straight from being a bonus track to one of the lead singles from the album; it totally changed the song. Musically, it’s aggressive as hell. It’s three and a half minutes of brutality with an uplifting chorus. I can’t wait to see how people respond to this track live."

"A fast-paced fuck you to the elite and those in power. This song really sings to us. We’ve played about with this triplet feel quite a lot in the past, there’s always one or two songs on our albums that have this kind of groove, but we feel like we’ve nailed it with Cast Down. The chorus and middle-eight are stand-out parts on the album for everyone in the band; it's groovy and aggressive at the same time. Changing the root note in the chorus made this a hard song to finish musically, but we couldn’t be happier with the final product. Probably our favourite ending as well – it’s disgusting."

"If someone had never heard us before and asked me to play them a song, this would be the one. That mid-tempo march, the four-to-the-floor chorus, the build-up, the heavy breakdown; it’s a classic Bleed From Within recipe, though now it sounds more refined thanks to the amazing mix from Mr Adam ‘Nolly’ Getgood. This one came to life when we heard the mix – we all knew it had to be a single. Lyrically, I turned to face some of my own demons, ones that were trying their hardest to interfere with my life. Afterlife tackles that feeling of helplessness when you are intoxicated; the guilt the next day, the realisation that you may have hurt someone you care about. It shouts about the feeling of belligerence, then cries for help."

"A dark anthem inspired by a lack of compassion in today's society. This one took a while to put together, I remember we were stuck without a verse riff for weeks. With the rest of the song pretty much finished, I jokingly played that driving drum-beat, Goonzi then sat bolt upright and started cutting his riff up around the drums. It was such a great moment because everyone was loving the track, but we were at the end of our tether. The ending of this song is one of my favourite pieces of music on the album. It’s classic Goonzi Gowans. That heavy drop riff with wailing melodies over the top of it. Epic."

"We’d reached a point in the writing process where we had five or six mid-tempo/groovy songs and we didn’t have anything that pushed the tempo. Goonzi knew we needed something fast and this was his response. The eerie lead notes over the chorus made this a favourite of mine straight away. It’s a dirty song, both musically and lyrically, and I think we really wanted something that just kept getting darker and darker as it progressed. We tried to portray that through the vocals as well, the vocals become more demonic as the end of the song approaches and I can’t get enough of it. The lyrics talk about how we view relationships in modern day society and the long-term effects of a society that is geared towards brief sexual encounters."

"This opening riff had been sitting around for years and even back then it earned the name Oblivion Pt. 2. While not a direct continuation of Pt. 1 – from Uprising, our third studio album – the energy is still the same and there are strong similarities. We decided that the lyrics had to carry over between the two songs, so Pt. 1 sees us taking someone prisoner and wishing to inflict pain on them for all the wrong they’ve done in the world. Pt. 2 is the brutal end to that story and sees us walking away with a sense of relief and freedom. I particularly enjoy the staccato strings in the chorus and Kennedy’s whisper in the first verse. The middle-eight section is also notably grim and pays homage to Davie’s (bassist) love of black metal."

Alone In The Sun

"This song has been around for a long time as well, and hasn’t really changed much. The final addition was the heavy middle-eight which really brought the song together. Like I mentioned before, we like to go between melody and aggression in our songs. Alone In The Sun is a great example of that; it picks you up for the chorus, then drops afterwards for the middle-eight, then goes back to the ambient leads before the chorus again. A classic example of how we like to put songs together. It's probably the cleanest vocal melody we’ve had in a song as well; something that we have experimented a lot with on this album and that definitely helped the song stand out."

"One of Steven's songs that he brought into the studio not long after he’d joined the band. This struck a chord with me straight away, I love the use of layers in his songwriting. There is always something going on in the background. The song drives through a few solid riffs then opens up to a massive chorus that Kennedy complements perfectly with another melodic chant. Lyrically I was inspired by a certain American president who used a ‘campaign of hate’ to rally his support, and also by a documentary called The Killing$ Of Tony Blair by George Galloway. The lyrics also venture into the mind of a martyr at one point. It’s a twisted journey."

"This was actually a demo that Steven sent us when he tried out for the band. The fact that it made its way on to the album says a lot about the quality of his songwriting. I know Goonzi had always wanted us to have a song that starts from nothing and builds into something massive, and Steven provided him just that. It was a stand-out track for all of us when Kennedy delivered his first demo, and it already seems like a fan favourite. I'm very excited to bring this to a live environment."

"Goonzi has had this sitting for a long time but it’s still as exciting as when I first heard it. We knew that guitar lead was something special and would grab people's attention from the get go, hence why we made it the first single. And while slightly unconventional, putting the lead single at the end of the album is a pretty easy decision to make when the last riff of the song is as big as this. The constant reference to the listener feeling ‘alive’ and shouting ‘this is how it ends’ all pointed towards it being an album finisher! Lyrically Kennedy wanted people to be aware of the world around them and to embrace life rather than create a false persona via social media etc. It's all too common a problem in this day and age."

Bleed From Within UK tour dates