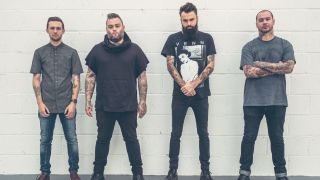 Even though the UK often receives the credit for inventing punk (despite the fact that we didn’t really), our hardcore scene has been oddly overlooked by all but the most passionate fans of the genre. Which is a shame, because it’s been thriving and brilliant for far too long to ignore. So here are 10 unsung gems from the UK underground.

10) Kneejerk – The Half-Life Of Kissing

If someone said the name Frank Turner to you today, you’d probably think of the folk-punk poet superstar who fronts The Sleeping Souls. But he was also in another band that deserve your attention… No, not Million Dead, the other one. They’re called Kneejerk, and their split EP with Abjure, Don’t Clap It Startles Me, is their finest moment, but the sole full-length album the band released is well worth your time. Far lengthier than your average hardcore album, full of invention, rage, melody and the sort of Iron Maiden galloping that young Frank first fell in love with. He might be able to sell out arenas these days, but check out the nine-minute Scalpel And Thread and you’ll discover that he’s never topped this creatively.

A band that hark back to the fast, furious, fat-free days of hardcore’s early years. Never Again paid no attention to musical trends or stretching the sound of the genre. Instead they took 22 tracks composed during their first year as a band and turned them into one of the most exciting records the UK underground had heard for years. Call it punk, hardcore, powerviolence, thrash… whatever – this is the sound of old-school, straight-edge music brought kicking and screaming into the new millennium.

Possibly the one band in the history of UK hardcore that achieved the commercial success and dues that they deserve. But, there’s no arguing about it, the last few years have been hard for Gallows, and it’s a shame that this coincided with one of their most interesting and diverse albums. Desolation Sounds borrows heavily from post-punk and even wistful folk music to create a much more grandiose-sounding band. Yes, there is nothing as instant as In The Belly Of A Shark, but the brooding Bonfire Season is reminiscent of Killing Joke at their most apocalyptic. Different, yes. Still great, of course.

Melding alternative rock with the most spittle-fuelled hardcore, Welsh four-piece Bastions are one of the most criminally overlooked bands in UKHC’s latter years. It seems bonkers that so many bands can thrive in the UK and not even attain a tenth of the emotional depth poured into Hospital Corners. From the singular, menacing guitar chug that opens Augury, the unpredictable rhythmic dexterity that drives Grief Beggar or the gut-wrenching, six-minute closer of Dark Father, this is an album that should have been heard by many more people. The fact they split up last year to barely a shrug from the general music scene says it all. Depressing.

6) Anthem Of The Century – The Enduring Vision

Formerly known as Silencer 7, Anthem Of The Century were an unfortunately short-lived band that showcased the strengths of the UK scene at the turn of the millennium, melding breakneck-speed ‘80s punk with modern production and a heaviness that hinted to where hardcore’s momentum was shifting at that time. They only managed this one album under the AOTC name, but what a killer record it is. The breakdown on Did We Build These Bridges To Burn? and the venom-fuelled pace of S.H.I.E.L.D. still sound incredible to this day.

Although nobody ever really talks about it, Grimsby had a killer hardcore scene in the late ‘90s. HHH and Stand were proof of that (if you’re interested), but the kings of the Grimsby scene were Imbalance. They mixed angular noise, thrashing punk rock, socio-political rhetoric and some superbly articulate spoken-word pieces in full northern drawl. Their entire back catalogue slams, but Wreaks Havoc With The Inner Ear gets the nod, if only for the lyrical genius of opener The Future Is A Joke, which rides along on a slashing riffs and warns us that ‘It’s going to get worse before it gets any better’. 15 years on, it’s a chillingly pertinent warning from the past.

4) Brotherhood Of The Lake – Desperation Is The English Way Vol.II

Another band that split after being ignored by a scene that should have lauded them. Although BOTL probably had mitigating circumstances, what with them being far heavier, sludgier and more extreme than the majority of their peers. A slot as the opening band on Gallows’ first tour with Wade MacNeil fronting them would have been seen as a huge coup for most bands, but Brotherhood Of The Lake were playing songs from their Desperation Is The English Way double album, which proved to be a leap too far into the darkness for many Gallows fans. Both are great, both incorporate elements of sludge, grind and even black metal into their ugly and uncompromising music. It’s not really hardcore at all. But it is incredible.

In the wake of Gallows’ success, it seemed that Britain was primed to once again become the global home of punk. None of the bands that followed in their footsteps could make a similar impact – even though Last Witness, TRC, Heights, Feed The Rhino and others gave it their best shot. One band that came in the direct aftermath were Brighton’s The Ghost Of A Thousand. Their debut album took garage rock, a metallic production and some throat-shredding screams and turned it into hardcore gold. Songs like Black Art No.1 and New Toy still sound powerful today, but what really shines is how catchy and instant these songs are. In today’s musical climate you could imagine them cleaning up on Warped or Slam Dunk.

The incredibly fertile Kent scene produced many great bands during the earlt noughties, but the kings of the Kent scene were definitely straight-edge five-piece xCanaanx. A good few years before America decided to kick-start the metalcore revolution, xCanaanx were making hardcore that was cut from a decidedly more metallic cloth. Gehenna Made Flesh is a stunning listen; full of pace, fury and riffs that owed more to Slayer than Agnostic Front. Clocking in at just under 18 minutes, it leaves you gasping for more, and, while it’s really brilliant, the fact that you won’t ever get to experience these songs performed live is the real tragedy here.

Hardcore has long held a fascination with the dark and macabre, from Misfits to Creeper via AFI, horror imagery has been a vital component to many bands. But one of the best to ever do it were Canterbury’s November Coming Fire. Their debut album Black Ballads was a brilliantly scathing mixture of Converge-style squalling hardcore, melded with pitch-black, gothic noir overtones. From the first chant of ‘In darkness we stand, divided we fall’ on opener Transgression to the industrial grind of closer Seventh, this is as good as UK hardcore gets.

The 10 best hardcore songs according to Vinnie Caruana