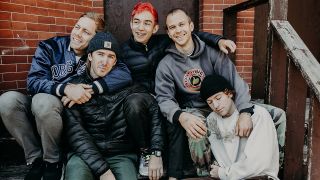 When Baltimore rock'n'roll band Angel Du$t released a few singles from their 2019 record Pretty Buff via Roadrunner Records, I was instantly hooked.

Coming off a turbulent holiday season into what seemed like a bleak pathway to career dread, personal defeat and endless winter, Angel Du$t was a light in my life I didn’t know I needed at the time. They helped me find love during a time in my life when I felt as though all hope or any grasp of consistency was nowhere to be found.

Dealing with love and loss is a tricky beast to tame; on the one hand, you’re grateful for the choice to have autonomy over your life, but on the other is the societal mask of “doing good” when you’re anything but. In November, when the band released Big Ass Love and On My Way, I opened up to accepting what was ahead of me and falling in love at the same time.

I had fallen in love with someone new, and it was a fast and turbulent, yet easy love. It fell into place in the late summer of 2018, and by November I was feeling burnt. While Big Ass Love was something we discovered and shared together, things were not as cheery or bright behind closed doors. I attempted to break things off one night when my mood was especially volatile.

Having large, sweeping mood swings and not being able to stay awake while I was at work, I came to found out I was pregnant the next day.

As lead singer Justice Tripp sings, 'If that’s the sound you’re dreaming of/I think you found a big ass love, oh yeah,' you wouldn’t think twice that this love song is a happy tune. Tripp found bliss in the tragedies that struck him during the making of Pretty Buff. Having his beloved dog pass away and at a crossroads, the dirt and grime were lifted when the flower of Pretty Buff bloomed to fruition. It was at this point I realised I had a life-changing decision to make, and it was anything but easy.

Wanting to be a mother was something I dreamed about, but the timing was not right; in fact, it was terrible. I had just become unemployed and was living at my parents’ house when I saw the two blue lines appear. Unsure where to go, what to do and my next move, I cried on the kitchen floor.

Luckily, my partner at the time was supportive and full of love. While the decision to have an abortion was my own, he was by my side through it all. We grew closer with each day passing, each clinic visit, each ice cream pick-me-up, and each time I cried from the tribulations women have to go through in the state of Ohio to get an abortion. He even inspired me to write about my experience with pregnancy and termination, which landed me an article in Bustle. One of the pieces I am most proud of to this day.

I had my procedure two days before Christmas. I spent the holidays masking the pain by smiling in photos. I had gone through the “can I have a baby?” scenario in my head a million times with more doubt each time I thought about it. The timing wasn’t right for me; when is it ever? The mood swings your body goes through after an abortion is a winding staircase to normalcy. By the time I had reached the bottom step, it was almost March.

When Angel Du$t released their record in the following weeks, I listened for what seemed like hours. While the release was poignant, beautiful, melancholy, and hopeful, I felt myself again listening to these songs. Sure, there was sadness and longing, but I remember those moments where we sat and had ice cream before my first appointment at the clinic, or when we drove to Pittsburgh for a concert, as some of the best times – despite the circumstances. Out of this shitty situation bloomed a bond for better or for worse and one that I will always remember.

Since March, not much has changed. It’s almost as if with each passing month, the abortion seems farther and farther from my mind. I’m not ashamed; in fact, I feel invigorated to help other women who are in a similar situation to myself.

Sometimes it might make me blue to think about this period of my life, but from the sadness, I’ve learned to enjoy those memories. We went to an Angel Du$t show soon after their release of Pretty Buff, and it was a special moment when Big Ass Love was played.

I can’t hear that song anymore without thinking of all we’ve experienced. As weird as it sounds, sometimes I smile when I listen to it.

This essay was taken from charity zine A Soundtrack To Surviving 2019, produced by Auxcord FM. Compiling 10 personal essays about music's role in surviving personal upheaval, all proceeds go to nonprofits The Yellowhammer Fund and Cat's Cradle Foundation. Check out their official site for more info and to order a copy.