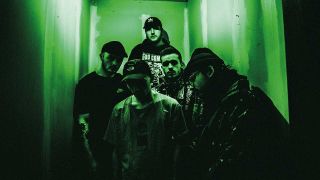 For Fans Of:
Loathe, From Sorrow To Serenity, Harbinger

“From an outsider’s point of view, Glasgow isn’t a welcoming place,” admits Lotus Eater guitarist Alan Ross. “But we’re the nicest people. We might stab you but we’ll phone you an ambulance as well!”

Musically and lyrically, confrontation is the name of Lotus Eater’s game. Even though they are still very much in their early stages, this tech-metal quartet have got hella lofty ambitions. Recently, they became the first heavy UK band to be signed by California-based label Hopeless, the home of massive names like Avenged Sevenfold and All Time Low over the years. It’s a huge coup for an aggressive young band, hewn from the mean, grey streets of Scotland’s biggest city.

“I’m sure people have an image of Glasgow in their head and it works really well that we portray something similar in our music,” says Alan. “Glasgow is the backdrop for it, it sets the theme…”

Although they formed years before as post-rock outfit As Daylight Fades, when current vocalist Jamie McLees joined the line-up it was clear things had to change. All of a sudden there was a darker, more sordid vibe penetrating the songwriting for what would become Lotus Eater’s self-titled 2017 EP: five tracks of uneasy listening, unhinged guitars and harrowing grooves.

“We realised that the stuff we were writing wouldn’t really fit [As Daylight Fades’] style so we decided why don’t we just go for something totally different,” says Alan. “That’s how it all started really, we realised what we were doing was something a bit different so we started pushing that.”

It’s fair to say Lotus Eater’s bleak and filthy cacophony is some of the nastiest tech metal Hammer has heard in a long time. The band, on the other hand, prefer to label their music simply as ‘gloom’. On the track Kin, amid nightmarish tones and a sheer battery of percussion, Jamie bellows maniacally: “My mental state is fucked...  Wounded by violence.” Latest single Branded, however, wields its grooves like an axe, with Jamie screaming blue murder over bludgeoning riffs, dissecting painful memories and reopening unhealed wounds; “The grip you had on me / Fixating on my weakness / Kill the bully / Kill him faster.” It’s unnervingly intimidating stuff.

“When we started we didn’t have a plan for how we wanted to come across, but over time, especially the first few months, we realised that was how people felt about it,” says Alan. “We quite enjoy it actually. If you watch videos of us live we seem quite angry, but we actually are nice people! We all just decided fuck it, we wanted to make it more personable. Musically, we just want to translate the weirdest, angriest, heavy stuff we can.”

That kind of bloody-minded goal might not usually correlate with huge household name success, but Lotus Eater aren’t the kind of band who’ll be content making a racket in the corner of your local boozer. Fresh off a tour with a newly energised Heart Of A Coward and fellow Glaswegians From Sorrow To Serenity, a solid run of barking at packed rooms has whipped up a thirst that won’t be easily quenched.

“The tech metal scene in Glasgow, is a wee bit niche,” says Alan. “I’m not worried about the scene dying but I’d still like to see more bands trying to give it a go. The more bands there are, the more shows there’s going to be. We want to take it as far as we can and headline shows in the UK and Europe comfortably. I know every band says this but we genuinely want to tour with Slipknot. We’re working towards that.”

Don’t bet against them.