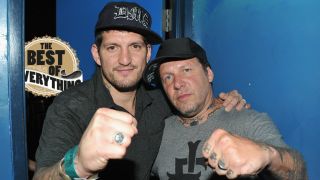 New York hardcore has been in Freddy Cricien’s blood for most of his 41 years. Even as a small child, his older half-brother Roger Miret – frontman of Agnostic Front – would get him on stage to perform vocals.

In 1988, Cricien became a vocalist in his own right and started fronting Madball. To date, the band have since released eight studio albums and four EPs. The band are set to visit the UK in December as special guests of Korn and Limp Bizkit.

An obvious choice for me, given my history and family ties with these guys. That said, I bet if you asked a few other people from the scene, they’d have this one on their top 10 as well… just saying! If you had to describe NYHC with one sound, chord or tone – the opening chord to this song would be it. Not to mention, the chorus ‘Why am I going insane, why am I the one to blame?’ The sentiment and delivery is all there. It’s honest, brutal, full of pain!

This was hard because almost any song on this record could have easily made my top 10. Simply put, Brightside by Killing Time is one of the best hardcore albums of all time, in my humble opinion. Lyrically speaking, I could relate to this song so deeply – it’s just an amazing track all around. Anthony’s [Comunale] voice is top! One of the best vocal tones to come out of NYC, if not the best.

This song always spoke to me on many levels. The pace is slow and heavy and every component of this track is just great! John [Joseph] kills it on the delivery as well! Simple and very effective, it’s one of those that can still provoke me to want to hit the dance floor – on the right occasion. I might!

Another hard one to pick because I love many of Sheer Terror’s songs. They’re actually one of my favourite NYHC bands; they’re in my top five, for sure. They’re unique, like all the bands on this list, as it’s one of the things I listen for. And these guys who are sometimes underrated have influenced many. You like Blood For Blood? Life Of Agony? The list goes on. Anyway, Close My Eyes is a classic of theirs and I can definitely relate to the lyrics – Paulie [Bearer, vocals] can vouch for that! Paulie is one of my boys but is also one of my favourite vocalist out of the scene. He’s not afraid to sing either, which he does well.

Besides the fact that Toby [Morse, vocals] is a dear friend, you have to give H2O credit for what they brought to the NYHC table. When they came out, it was a breath of fresh air and provided some much needed melody that had been missing for a bit. NYHC has always had diversity, including melodic bands (Gorilla Biscuits, ETC) contrary to what some may believe. But these guys do the melodic thing in way that no one else does and somehow it’s still very ‘New York’. It’s hard to pick just one track, but this one is a great representation of their sound and style – and the lyrics hit home, too. Super catchy, love these guys!

You can’t have a top 10 NYHC list without Sick Of It All. I got into them early on, of course, hence my choice of song. These guys have many good songs and are still putting out consistently good music and still play their asses off live. They are, hands down, one of the biggest exports from of ‘our scene’ to date and worked very hard to get there so, hats off! This song still makes me want to punch people in the face…really hard… In our non-PC world… that’s a good thing!

RIP Raybeez. [Vocalist Raymond Barbieri] was one of the first guys I met from the scene, as a young kid. He was always super cool to me and there was always a lot of mutual respect between us, up until his passing. He gave me his blessings very early on when we started Madball, he always had nice things to say about us. It meant a lot. Warzone’s entire discography is very relatable to a lot of us. They were the people’s champ in a lot of ways! This track though, was special: great song, great message and it influenced one of the biggest songs to come out of NYHC. Warzone were most certainly influenced by both Agnostic Front and the ‘Mags… who isn’t? But, there would be no Gotta Go if not for this track . It’s a homage to Ray and one he would be proud of – or is proud of.

These cats put out a classic first LP called Born To Expire [1989]. But, Kingpin off of Desperate Measures is one of my favourites. It had all the Leeway elements you wanted and a hip hop type of swagger that I personally could appreciate. Respect to these guys for doing this and not following the trends in the scene they were a big part of. That’s always something to admire.

Here’s another band you couldn’t omit from any NYHC top 10. This was a hard choice because they have several classics, but this song in particular has some of my favourite Murphy’s Law riffs. I love the pace and well, I love beer! Murphy’s Law were the official party starters of the scene and they can never be duplicated. Jimmy [Gestapo, vocals] is a riot. He’s family and a great presence and personality on stage. He once told me, ‘Kid, this is your legacy’. I was very flattered by that and it planted a seed for a future album title!

I know what everybody is thinking, these cats are from DC – not NYC! True. But, when they were banned from DC [the band found themselves unable to get gigs in Washington in 1979] guess where they made their home? In the Lower East Side, the home of NYHC. I can relate to not being a native and making that kind of move [to New York]. They’re honorary New Yorkers based on that, and their influence on NYC and the hardcore world in general. In my book, they earned a slot. This track is one of my favourites out of so many great Bad Brains joints! They were unbeatable in their prime.

Madball tour the UK in December.