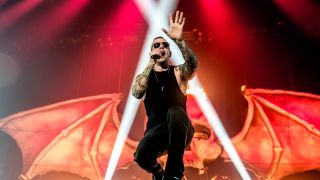 At the start of the year, we published a piece about the albums we were most excited about in 2016. While many of the bands we mentioned have delivered (cheers Babymetal, Letlive, Architects, Killswitch Engage and co.), we’re still waiting on a few too many of the others for our liking. Yeah, it’s only halfway through the year, and yeah, maybe we are being a little bit impatient, but consider this a kick up the bum for the artists that hold the keys to the new material we’re poised to hear.

Where else could we start? With the clock ticking over into a full eight years since Death Magnetic, it really isn’t surprising that we’re getting a bit peeved with the wait for a new Metallica album. Back in January we were told that it would ‘most likely’ be coming in 2016, and that’s the line that’s still being towed by the Metallica camp. We do know they are in the studio with producer Greg Fidelman, we know that Rob Trujillo has added some backing vocals and we know that it will carry along the same lines as Death Magnetic. What we don’t know is when we will hear it. Come on lads! Sort it out!

What with the trauma that Avenged have suffered replacing the enigmatic and unique talents of Jimmy ‘The Rev’ Sullivan on their drum stool, the Orange County superstars do deserve to be given a bit more patience surrounding the follow up to Hail To The King. But with new sticksman Brooks Wackerman speaking about new material already being worked on at the tail end of 2015, we were hoping to have heard more from the A7X camp at this point than the quick clip of demo material they shared back in April. With the band still demoing material it remains to be seen if 2016 will be the year that Avenged return.

After delivering one of the best British debuts of the 21st century in 2014, we are still waiting to hear a peep of new material to the follow up to The Weird And Wonderful… Recently the band posted a 47 second clip of sombre piano music with the message ‘Updates Soon’ accompanying it. Was it new material? Who knows, but it’s been worryingly quiet in the band’s camp in 2016. With a whole new crop of British bands releasing brilliant albums already this year, let’s hope Marmozets don’t get left behind.

Another band with mitigating circumstances surrounding the release of new material, with the severe medical problems experienced by Austin Carlisle derailing the band over the last year. But the follow up to 2014’s Restoring Force has now been announced, with Cold World being unleashed on September 9. The band have already announced a UK tour in its support, and you can hear new song Pain right now. Welcome back chaps!

One band that we can be certain to hear new music from in 2016 are the Swedish, tech-metal monsters. With a full European tour announced for November, surely in support of new material, and a 17 second long teaser trailer on the band’s Facebook page, it seems that the follow up to 2012’s Koloss is imminent. Although there is no official release date as yet, this one will be happening. Can we have it soon please?!

Following a stunning sub-headline slot at Download this year, it’s perfectly aligned for Korn to return with new material in 2016. Quite when we will get our hands on the nu-metal godfathers’ twelfth studio album is less clear. Guitarist Brian ‘Head’ Welch has been talking up the album as being ”The most intense Korn music in a long time” and “Back to basics”, which is all well and good… But we’d really quite like to hear it for ourselves now. Chop chop boys!

Another band that we will definitely see new music from in 2016. This year marks thirty years since the cult noisemakers’ first demo – an event the band have already celebrated by playing two career-spanning shows at Roadburn festival, and so it seems apt that they will release the long awaited follow up to 2012’s Honor Found In Decay this year. Frontman Scott Kelly recently revealed that Fires Within Fires will come out on their own Neurot Recordings label on September 23. Expect it to sound like the Earth imploding, as always.

Every Time I Die

Okay, so this one is a bit of a cheat. After all, it’s barely been two years since ETID released the, as ever, excellent From Parts Unknown. But their recent four night stint in London off the back of their headlining slot on the Impericon stage at Slam Dunk has left us breathless and desperate for another album of savage metallic hardcore. And we’ll get it on September 23 with the release of Low Teens. Hooray!

This was always a bit of a long shot, especially with guitarist Richard Kruspe telling the world in late 2015 that it takes at least two years between the band getting in the studio and a Rammstein album seeing the light of day. But we did get a taste of new material during the band’s recent European festival run, as their sets opened with a new song that has been dubbed Ramm4 by the internet. It’s the only crumb of comfort we have at the moment, as 2016 is looking less and less likely to include a new album from the German megastars.

It’s getting a bit old now, isn’t it? It’s now a full decade since Tool released 10,000 Days and we are seemingly no closer to knowing when its follow up will arrive. There have been rumours and counter-rumours in the last few years, and with a band like Tool it seems sensible to just take every piece of gossip and quote attributed to the band with a pinch of salt. That said, while frontman Maynard James Keenan said this March that the band “Just can’t seem to move forward”, Melvins’ Buzz Osborne recently told TeamRock that “They [Tool] haven’t started recording [new material] yet, but Adam [Jones, guitarist] told me the shortest song they’ve been working on is twelve minutes long”. Though Keenan might be busy touring the world with side project Puscifer, perhaps a new Tool album isn’t such a distant prospect after all.