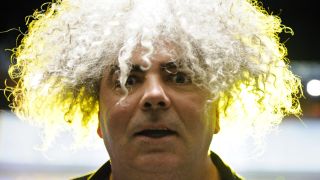 When you’re a band with a back catalogue as overwhelmingly massive as the Melvins do, it’s kind of hard to pick your 10 favourite records of your own. In fact, according to frontman Buzz Osbourne, “it’s nearly impossible”.

Since forming in Montesano, Washington in 1984, the group – rounded off by drummer Dale Crover and a constantly revolving cast of bassists – have released a staggering 25 studio albums, 14 EPs, 12 live albums and 10 compilation records and have never settled on one idea for too long. But where do you start when your back catalogue includes everything from live experimental noise sets to collaborations with Jello Biafra and Lustmord?

“I rarely know what people want but that doesn’t bother me too much”, says Osbourne. “The fact is, I would never have been happy doing the same thing over and over again. That wouldn’t have been me. Plenty of other bands could have gone down that line too, I just don’t think they had the guts to do it. But I’m not afraid.

“You just have to keep doing what you’re doing and not concern yourself with the fact that maybe not everybody is on board with what you’re doing right now”, he adds. “If I started worrying about what people were going to like, I think I’d miss the boat; I’d be completely off base with what I was doing and I think it would be a complete failure. I’ve always thought that’s a mistake, and I’m certainly not going to change now. I don’t think I’m wrong either.”

Fair enough. Here, then, are the essential Melvins releases, according to Buzz…

“Let’s start with this record. It’s an EP, but I like that record a lot. We did it really quickly and for very little money. I personally like EPs better than LPs because my attention span is less challenged, but people don’t generally buy EPs the way they do LPs – I don’t know why. When I go to concerts I’d also much rather see a band play a good solid 40-minute set than an hour and 40 minutes. I’ve kind of always felt that way, except for maybe when I was 16 and it was just nice to be away from my parents for a long time. Nowadays, I’m good after 30 or 40 minutes. But people don’t prefer that either. Anyway, we probably spent about 500 bucks making that EP and it came out great. It was a precursor to the Lysol record [aka Melvins aka Untitled aka Lice-all, 1992], and it was me, Dale [Crover, drums] and Lori [Black, bass]. You can kind of hear where Lysol came from out of that record; people could see what was to come. A lot of people seemed to think the Lysol record came from Joe [Preston, bass] joining the band, but I always say, ‘No, listen to the record that came before it.’ I like the Eggnog record a lot.”

“Next I’d have to say Pigs of the Roman Empire, which is the record we did with Lustmord. I like that one a great deal. We’d never done anything like that before and it’s a true collaboration, meaning that we never jammed with him. He would give us stuff and we would give him stuff, and some stuff on that record is just us and some stuff is just him. We’d also mess with some of his stuff and he’d mess with some of ours, but we were never actually in the same room together and we never made music directly together, so it’s a real collaborative effort in that sense. He’d never worked with guitars before either, which was cool, and I think he did a great job. I’d love to do a live show with him at some point; maybe one day that will happen. I will say that the record wasn’t met with a lot of enthusiasm when it came out, which was kind of a head scratcher for me, but to this day I can listen to it and I still think it’s a really great record.”

“This is another true collaboration that Dale and I did with the guys from the Butthole Surfers; Paul Leary [guitar] and Jeff Pinkus [bass]. We’d done a lot of live shows with Jeff before that, and we had the idea to record with Jeff whilst we were on tour; I was like, ‘Oh, and what about also playing with Paul?’ Paul is one of my favourite guitar players, and through Jeff we made that happen. For that one we did meet up and write songs together; it was me, Dale and Jeff more than it was me, Dale, Jeff and Paul, but Paul did contribute a lot to the songs and he also brought in his own songs that we all played on. He sang three songs on the record as well, which was really odd for a Melvins record but it was great. It was a really fun record to do, and I’d love to do another one with those guys. It was unlike anything we’ve ever done. We still play a bunch of those songs live too, and the Butthole Surfers, to me, are one of the best bands ever; they’ve never done things by the book and that’s exactly what I like about them.”

“Nude with Boots was one of the records that we did with the Big Business guys [bassist Jared Warren and drummer Coady Willis]. It was the second one that we did with them and I think we really hit our stride with that one. And it was another that was done relatively quickly; the guys had moved to LA and settled out there for a while and we did it in a studio in the middle of Hollywood that’s not there anymore. One of the songs is a cover of an old Gregorian chant [Dies Iraea], which we got the inspiration to cover from The Shining [the 1980 horror film by Stanley Kubrick]. It’s been in a bunch of movies, including The Bible by John Huston, and we did our own version of it on that record. I really love that record, and for the first time since the very early days I only used one guitar on the whole thing. There’s a song called Billy Fish that I really like on there as well. We should start playing that song again.”

“We did the Freak Puke record with Melvins Lite, which is me, Dale and Trevor Dunn [Mr. Bungle] on stand-up bass, and that was a new thing for us at the time. The record came out in 2012, and that same year we did a tour of the United States where we played all 50 States plus Washington, D.C. in 51 days. That was a real challenge, but we did it and we made it through the whole thing. When we got down to the last few days we were like, ‘OK, we’ve gotta make this work’, because that’s not something that you want to do over, you know. But it was a great thing to do and the record was a cool one to make. Once again, it was a record that was unlike anything we’ve ever done, and the stand-up bass really shone through. We just let Trevor do his thing; he’s a great player and a really good friend. We got to be close playing in Fantomas together, and that’s kind of how that record got cemented. And there’s more of it to come. I’d also love to do a tour with him where we do half stand-up bass and half electric. That would be really cool.”

“The Stoner Witch record was the middle record of the three that we did with Atlantic. It wasn’t the best selling record from that time; Houdini was the best selling one but that was actually my least favourite of the three. I’m proud of all of those records though, and when you listen to them you can tell there’s not a lot of record company meddling going on. Stoner Witch in particular was a lot of fun to make, and we really learnt a lot in the studio on that one. I think it was the longest time we ever spent in the studio actually; 19 days, which for us is a long time. Bands like Tool obviously spend about six months on their albums, and they’ve spent about ten years putting together the new one. And they haven’t even started recording yet, but Adam [Jones, Tool guitarist] told me the shortest song they’ve been working on is twelve minutes long. Anyway, Stoner Witch was great.”

“I have to put the Bullhead record in my top 10. We intentionally made a record that was very different to the two that came before it with that one, and we made it for almost no money in four or five days, including mixing. I did my best to make everything single song was different as well; I really wanted each one to have an individual flavour. That was the idea and I think it worked. I really like the cover art for that one too, which was kind of how it worked for us from then on.”

“Basses Loaded was really fun to make. We used six different bass players and all but Steven McDonald [Off!/Redd Kross] we’d worked with before, except for Krist Novoselic of course, but we go way back to the early ‘80s with him. It was a lot of fun to do and we didn’t even realise what was going on until we were way into it; our intention wasn’t to have six bass players at the start, it just turned out that way and I think that aspect of the record gave it a really cool flavour. And now we’re touring with Steve and that’s a whole other new thing for us, so I couldn’t be happier.”

“Colossus of Destiny is one of my all time favourite albums that I’ve ever done. We did a trilogy of albums in 1999 – The Maggot, The Bootlicker and The Crybaby – and Colossus was supposed to be the third record in that trilogy, but then I got the idea of working with guest stars and so it sort of became like the unofficial fourth one. It’s a live album, and we played a show where we did like an hour of crazy noise type stuff, which was worked out down to the wire, into a regular set. So on the album you hear this noise thing and then Eye Fly, which was the first song in our set, and that’s the end of the album. I really think that record is great. It always amazes me when people go, ‘This is bullshit, it’s just noise’, because it’s not just noise; there’s a meter and a flow to it that makes a lot of sense. If you don’t get that then you really just don’t get what we’re doing. We’re big Throbbing Gristle fans and we’ve always loved that sort of thing. And I’m sorry if you feel that way, but I think that record is beautiful. I think it’s one of the best things that we’ve ever done, and if I had to pick just three albums to give someone to figure out what this band is about, Colossus would be one of them.”