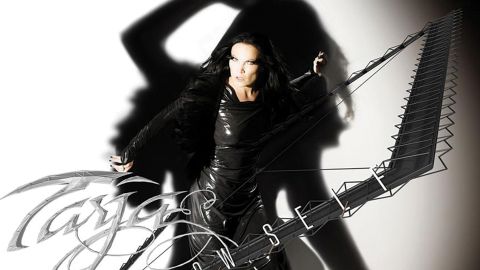 After her detour into the classical realm on 2015’s Ave Maria – En Plein Air, Tarja Turunen returns to the world of symphonic metal that made her famous with The Shadow Self. Much like the opera that informs her vocal technique, Turunen isn’t one for subtlety. That soaring voice is always up front and centre, rarely dipping below gale force.

A sense of drama that would make Lloyd Webber blush…

The album opens with Innocence where the classical influence comes right to the forefront in Izumi Kawakatsu’s sweeping piano solo. Demons In You opens with some Nile Rodgers-style funky guitar from Julian Barrett and Flea-like slapping bass courtesy of Kevin Chown, which is both bold and fun, but quickly moves into more standard metal fare. The track features guest growls from Arch Enemy’s Alissa White-Gluz, but her talents are rather underused here in an all too brief contribution. It would have been more engaging to really exploit the contrast between the two voices, one high and pure, the other low and demonic. There’s a dash of Celtic flavour in the ballad The Living End – are those bagpipes? – while Diva, which could have been lifted from a Broadway musical, is gleefully over the top with an outrageous sense of drama that would make Andrew Lloyd Webber blush.

The singer previously covered Alice Cooper’s Poison on My Winter Storm back in 2007. This time, she dips into Muse’s repertoire for Supremacy, which provides the heaviest cut of the record thanks to Matt Bellamy’s crunchy riff. The track naturally lends itself to Tarja’s bombastic style and gives her the chance to really launch into the upper limits of her range. Somewhere a dog’s ears are twitching. Little brother Toni Turunen swings by for a guest spot on Eagle Eye, but like White-Gluz’s appearance, it barely qualifies as a cameo. Diva, indeed.

The challenge for anyone coming to Tarja’s music for the first time will be how they feel about the operatic delivery. Every song here puts the spotlight on her power and range, which are both considerable, but that can mean she sacrifices subtlety and limits the variety of emotions she is able to convey. There are singers with less range who can load a lyric with far more visceral power than Tarja, who leans too readily on her technique – think of Kate Bush and Ann Wilson. Or, to cast a wider net, jazz legend Billie Holiday had a limited range and no schooling, but poured her soul into every syllable. Tarja might not seduce you with her magniloquence but there’s certainly no doubting the intensity of her performance.

Tarja Turunen: "music has no boundaries, it's about breaking borders"

10 years after Nightwish, Tarja Turunen is stronger than ever