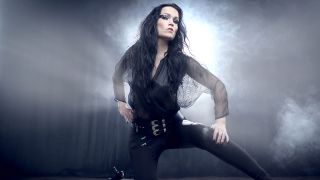 If you’ve never experienced the majesty of symphonic metal star Tarja Turunen, just imagine Kate Bush fronting Slayer, soaring through the clouds on a winged chariot pulled by fire-breathing dragons. Yes, she is that good. The Finnish-born, classically trained diva is about to release her new epic The Shadow Self, hard on the heels of its sister album The Brightest Void. Both are Wagnerian in sound, Olympian in scale. Kneel before Tarja, puny human weaklings…

In the last couple of years I felt very productive. I don’t want to waste these for B-sides or bonus tracks. We ended up releasing two albums because of that, and also because I wanted to add some special songs to The Brightest Void. For instance, Your Heaven And Your Hell with Michael Monroe. All the songs are dealing with the opposites in life: positive and negative, heaven and hell, yin and yang…

You make classical and rock albums. Do you experience more snobbery from classical fans than metal fans?

Honestly, I’ve been doing this for twenty years now and I’ve always been breaking all the borders. For me, music has no borders. If there is emotion involved, and if the message goes through to the listener, then it doesn’t really matter. If I didn’t take the classical music as seriously as the metal, I think I would receive much more criticism.

Is it harder to sing Verdi and Puccini, or Led Zeppelin and Scorpions songs?

To be honest, opera isn’t my thing – it’s more chamber music. But obviously I’m more nervous when I’m singing classical music because there’s a certain perfection you’re seeking in performance, technically and sonically. In rock you can just give it your all.

Oh my goodness! I don’t think so. The most important thing would be for all the people working with me to be happy. Maybe you should ask them how they feel about me?

Relations between you and Nightwish were frosty when you left in 2005. Has there been any thaw since then?

We haven’t been in touch. It was beautiful music, and I am grateful because I learned enormously.

So you don’t stick pins into voodoo dolls of your old comrades?

No. If you keep doing that you just hurt yourself. That’s the subject of the last song on my album. It’s called Too Many.

You were born and raised in Finland. My main impressions of Finland are: bitter cold, boiling saunas, weapons-grade vodka and eating raw reindeer meat. Accurate?

No, these things are very much a part of our culture. Obviously there are much more beautiful things to see too. Ha! Those things you mentioned, I do not miss them… well, the sauna I use a lot.

So when you next tour the UK, should people bring you gifts of vodka and raw reindeer meat?

No vodka. Red wine please. But I’m fine with the reindeer.