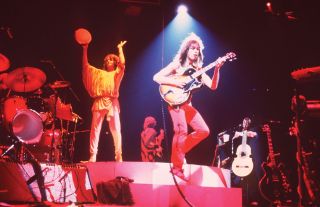 60s guitar-driven pop band The Syndicats were Steve Howe’s first ever band. The jaunty, upbeat True To Me, penned by Howe, was a Joe Meek-produced B-side to their first single, Maybellene.

There’s a distinctly psychedelic vibe here from Tomorrow. Penned by Howe and singer Keith West, this preceded The Beatles’ song of the same name by a year, and it’s thought to have inspired Lennon’s tune.

Almost everyone has heard this 60s pop classic, but few knew that Howe played guitar on it, alongside former Tomorrow singer Keith West.

The first time Yes fans heard Steve Howe on guitar was with the bold opener on The Yes Album. All big, bouncy riffs and chords, it was immediately evident that Yes were a very different prospect with Howe.

Influenced by Howe’s hero Chet Atkins, and written to celebrate the birth of his son Dylan, this solo tune highlights Howe’s dexterity with the acoustic guitar. It was recorded live at London’s Lyceum in 1970.

The other really big musical statement from The Yes Album, the closing Würm section of this track was developed from a song called Nether Street by Howe’s pre-Yes band Bodast, whose sole album hadn’t then been released.

The title track from the band’s 1977 album Going For The One is an all-out guitar attack from Howe. He played steel guitar throughout the entire song, which was a first during his time in the band.

Although the writing partnership of Geoff Downes and John Wetton tended to overshadow all else in Asia, this track from their debut was written by all four members and remains one of the debut’s finest tunes.

Howe’s partnership with former Genesis guitarist Steve Hackett might have been too commercial for some, but this energetic single stood out on their sole album.

As Howe proudly states, only he and David Bowie were ever invited to perform on a Queen song. Here his delicate flamenco playing is a real highlight on one of Queen’s proggiest songs.