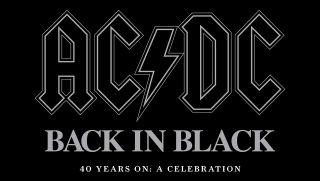 Sometimes things can get a little, er, fractious at Classic Rock HQ. You see, we share an office with our chums from sister magazines and websites Metal Hammer, Prog and Louder, and while usually it’s an amazing place of bonhomie and banter, ever so occasionally hackles and voices are raised over what makes its way onto the office stereo.

And in instances such as those, there are but a few albums we can throw on that will bring the peace (by, er, kinda bringing the noise). One such record is, unsurprisingly, AC/DC’s majestic Back In Black, which celebrates its 40th anniversary this year, and is the album we’re celebrating this issue.

AC/DC
The death of their frontman Bon Scott in February 1980 looked like it might have dealt a fatal blow to the band as well. But they got a new singer, and made a career-rejuvenating record that became the biggest-selling rock album of all time: Back In Black.

Phil Carson
When he signed AC/DC to Atlantic Records for 25,000 dollars for the rights to 15 albums, he might well have made the deal of the century.

Joni Mitchell
Released 50 years ago, Ladies Of The Canyon marked the moment when she went from folk princess to pop star, while setting the pace for the entire singer-songwriter movement.

Steve Howe
He could have been known only as the guitarist with proto-psychedelic Brit-rockers Tomorrow. Instead he joined Yes, and began a long career as a member of prog royalty. All this and more in the Classic Rock Interview.

Kiss
They broke out of the New York City clubs in 1974, determined to become huge. But it would be a long, hard slog before the rest of America paid attention.

Big Boy Bloater
R&B journeyman Big Boy Bloater reflects on the merits of dangerous music, breaking the speed limit in a hearse, and why having to deal with angry drunks can be a good thing.

When Goth Went Metal
In the second part of Classic Rock’s epic oral history of goth, we look at the rise of goth metal, which saw some early goths elbowed into the margins or disappearing completely, their thunder stolen by goth-leaning arrivals from the metal world.

Krokus
Heading for glory in the 80s, they skidded out of the fast lane due to inflated ego, divisive management and white-line fever. Now, after 45 years, they’re parking the tour bus for good.

The Dirt
In a new film, former Lynyrd Skynyrd drummer Artimus Pyle tells his story of the fatal 1977 plane crash… Aerosmith ban their drummer from playing with the band… Geddy Lee and Alex Lifeson thank fans for their Neil Peart love.… Soundgarden respond to Chris Cornell’s widow in a dispute… Speculation over a Genesis reunion rears its head – again… Welcome back Gotthard, ...And You Will Know Us By The Trail Of Dead and Maria McKee… Say hello to Station and Naked Six… Say goodbye to Andy Gill, Ivan Král, Reed Mullin…

The Stories Behind The Songs: Dio
Not just a good song, Rainbow In The Dark was part of an album that Ronnie Dio said was “one of the proudest things I’ve ever done”.

Q&A: Steve Harley
The singer, songwriter, actor and more on folk clubs, never giving up, pop stardom and the problem with guitarists.

Six Things You Need To Know About… Blackwater Conspiracy
Meet Northern Ireland’s maestros of southern-fried rock’n’roll – with one foot in their local roots.

Buyer’s Guide: The Kinks
Which albums to go for if you’re looking to dip a toe into the catalogue of a band who wrote some of the most enduring songs of the 60s.

Live Previews
Must-see gigs from the Testament/Exodus/Death Angel package, Country To Country Festival, William DuVall, Fish and The Night Flight Orchestra. Plus full gig listings – find out who’s playing where and when.

The Soundtrack Of My Life: Erik Grönwall
The H.e.a.t frontman on the special records, artists and gigs that are of lasting significance to him.

Classic Rock 273 is in UK newsagents now and available to buy online. You can subscribe to Classic Rock below.