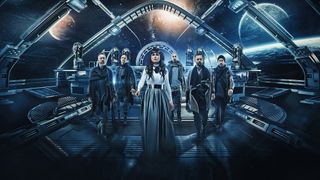 Within Temptation will release their new studio album Resist on December 14, via Spinefarm Records.

As revealed exclusively in the new issue of Metal Hammer, Dutch symphonic metal supremos Within Temptation are returning with their seventh album this winter following months of turmoil and uncertainty within the band.

Speaking about the record itself, vocalist Sharon Den Adel says the band have taken inspiration from modern music, but given it a "dark" face.

“Sometimes it feels that today’s pop music lacks a rebellious edge. Our main goal was to collect pieces from sounds we did like then roughen the whole thing up as much as we could, allowing us to shape a new musical world that is heavier, dirtier and more futuristic than we’ve ever created before. Resist is our new take on metal; our way of giving a fresh lease of life to the rebellious edge of modern music.”

"We are beyond excited to have signed to the biggest record label," says Sharon. "Combining our strength with such a thriving, forward-looking force in the music industry, we are sure that we can make magic happen.”

Pick up the latest issue of Metal Hammer now for a world exclusive interview and the full story behind Resist and how the band fought their way back from the brink of implosion.