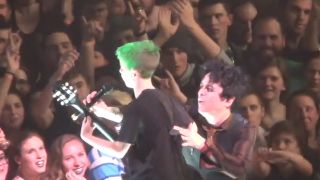 Green Day’s Billie Joe Armstrong invited a young fan onstage to play with them on their cover of Operation Ivy classic, Knowledge.

They regularly invite fans on to the stage when they play the track – but the fan called Grant stole the show when he helped the band through the track, drawing huge cheers from the crowd at Worcester’s DCU Center in Massachusetts.

Armstrong spots Grant in the crowd and asks him: “How long have you known how to play the guitar? Do you know three chords? All right, get your ass up here!”

The Green Day singer then shows him how to play, before the boy launches into the riff to huge cheers. He then joins Armstrong to sing the track.

At the end of the performance, Armstrong gives him the advice: “Never smash a guitar” before telling him he can keep the instrument. Watch the clip below.

Green Day are on the road in support of their 2016 album Revolution Radio.

They have several shows remaining on the current North American leg and will then head to Australia, New Zealand, Europe and the UK later this year, before returning for further US and Canadian dates in August and September.