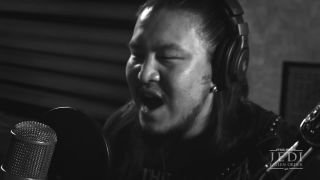 Mongolian stars The Hu have released a video for Sugaan Essena, which is featured in the action adventure game Star Wars Jedi: Fallen Order.

"We were all fans of Star Wars beforehand," the band tell Revolver. We started watching the movies at such young ages and all wanted to be Luke Skywalker. The character of Luke gives us a desire to be strong, honest men.

The song is sung in a fictional language created under the direction of Lucasfilm and Respawn Entertainment, the makers of the video game.

"For the song to mean anything and make sense to us, we had to write the lyrics in Mongolian first. Then we performed it during our live shows in Europe and the U.S. After which we wrote lyrics in a language authentic to Star Wars with the guidance of the game's creators as we got closer to the launch of Star Wars Jedi: Fallen Order."

Earlier this moth The Hu announced a run of North American tour and festival dates for 2020. In December, they released a new version of their YouTube smash Wolf Totem, with an English vocal courtesy of Papa Roach's Jacoby Shaddix.

The Hu's debut album The Gereg is out now.