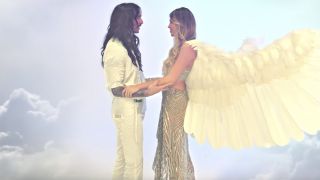 The Darkness have released a video for their new single In Another Life.

It’s the latest track from their studio album Easter Is Cancelled, which launched last year through Cooking Vinyl

Described as a “gargantuan rock opera” the Hells Bells-created video sees frontman Justin Hawkins banished to the depths of hell. However, thanks to the power of rock and his bandmates Dan Hawkins, Frankie Poullain and Rufus Taylor – together with TV personality and model, Abbey Clancy – Justin is rescued just in time for a party in heaven.

Justin says: “In Kristy May Currie, we have found our saviour. She came to us with an entire concept, storyboard, shot list and cast. All we had to do was look fabulous and ‘act’. It was like the glorious olden days, when everything we did mattered enough to be done properly. Kristy is brilliant and passionate and I hope we get to work with her again!”

He adds: “I know from my own experience that when one is as beautiful as Abbey Clancy, there is no obligation to be nice to anybody. There’s no obligation for her to do anything at all, the sheer force of her beauty will bend the universe to her will.

“Nevertheless she is the living embodiment of grace and kindness. Aside from her brilliant acting and dazzling appearance, she was awesome company and we had a great laugh all day.

“I’m beginning to wonder if perhaps she is an actual angel. Anyway, I’m a disciple of Clancy and I make no apologies for that. I hereby dedicate my life to her.

“I hope folks enjoy this vid, it was a thrill to make. We all insisted on doing our own stunts so this may be the last The Darkness music video for a while as we explore opportunities in Hollywood.”

Clancy adds: “It was so much fun saving Justin from the fiery gates of hell. I’m a big fan of The Darkness and I’m so happy they asked me to be involved. The guys made the video shoot so easy and we had so much fun on set. It looks amazing, and playing an angel was a heavenly way to spend the day.”

The Darkness will return to the road later this month across Europe in support of Easter Is Cancelled, kicking off on January 25 in Strasbourg, France.

The Darkness: Easter Is Cancelled Deluxe CD (signed) + vinyl (signed) + Cassette + Signed Band Photograph
In addition to the orange vinyl, Townsend Music also have this mega-package with the album on vinyl, cassette and CD, with bonus tracks AND a signed photograph.View Deal