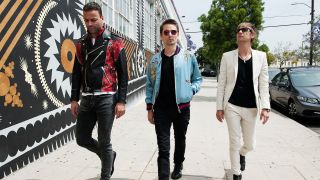 Muse have released a trailer for their concert film Drones World Tour.

The film will hit cinemas for one night only on July 12 and was filmed over multiple live shows in 2016.

A statement on the release says the 90-minute spectacular will showcase “Muse’s career-spanning hits including Psycho, Madness, Uprising, Plug In Baby, Supermassive Black Hole and Knights Of Cydonia, among others.

Muse released a video for their track Thought Contagion in February and will head out on the road for a handful of dates over the coming weeks.