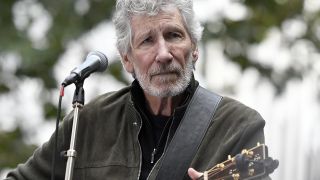 Footage has emerged online of Roger Waters performing at a rally in support of Wikileaks founder Julian Assange.

The former Pink Floyd man attended the Don't Extradite Assange demonstration outside the Home Office in London on Monday and performed Wish You Were Here, dedicating the acoustic track to Assange, who is currently being held at HM Prison Belmarsh.

Waters told the crowd: “How do we put ourselves in the position of a Julian Assange in solitary confinement, or with that kid in Syria or Palestine or Rohingya, being blown to bits by these people in this building here?”

Watch the footage below.

Assange took refuge inside the Ecuadorean embassy in London in 2012 to avoid extradition to Sweden over sexual assault allegations which he has denied.

He was arrested inside the embassy in April this year and in May was sentenced to 50 weeks in prison for breaching bail conditions.

Assange is facing extradition to the US over his alleged role in the release of classified military material in 2010, with a five day extradition hearing set for February 2020.

Waters, meanwhile, will premiere his Us + Them concert film at the Venice International Film Festival on September 6. The film will then be screened around the world on October 2 and 6 through Trafalgar Releasing.