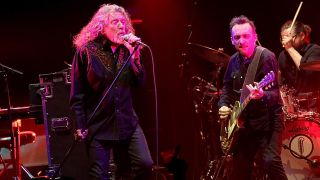 The live track was filmed at the Moody Theater in Austin, Texas, on March 20 by Austin City Limits – part of an hour-long set that will be screened on PBS across the US on October 15.

Plant’s tour was titled Blues… Roots And Hollers (A Southern Journey) and saw the former Zeppelin man play 11 dates in the US.

He said of the tour: “We thought we’d take time out to raise a little sand and welcome springtime with one more adventure, another celebration of life and song.

“I’m always eager to return to the hospitality of the Southern states. Towns and cities that hold fond memories for me personally, places that gave birth to so much of the music I love.

“Our recent travels have taken this wild whirlwind of a band through many incredible and inspiring places.”

Plant was joined on the road by The Sensational Space Shifters, with the Austin set comprising of eight tracks.

He’s currently on the road on The Lampedusa Concerts For Refugees North American tour.