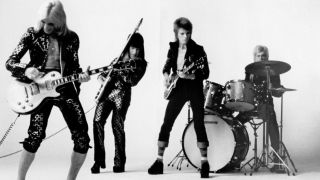 Mick ‘Woody’ Woodmansey is to release a book next month which details his time with late singer David Bowie.

The drummer is the last surviving member of Bowie’s The Spiders From Mars and started work on the publication in 2014.

A statement reads: “With the confidence of youth, Woody always thought he’d be in a famous band but the 19-year-old rocker from Hull never expected to be thrust into London’s burgeoning glam rock scene, and also into a bottle-green velvet suit and girl’s shoes.

“Playing with Bowie took him on an eye-opening and transformative journey. In Spider From Mars he writes candidly about the characters who surrounded Bowie, recalling the album sessions as well as behind-the-scenes moments with one of the world’s most iconic singers.

“The result is an insightful, funny, poignant memoir that lovingly evokes a seminal moment in music history and pays tribute to one of the most outstanding and innovative talents of our time.”

Woodmansey played on Bowie studio albums The Man Who Sold The World in 1970, 1971’s Hunky Dory, 1972’s The Rise And Fall Of Ziggy Stardust And The Spiders From Mars and 1973’s Aladdin Sane.

Spider from Mars: My Life With Bowie will be released on November 3 and is available for pre-order via Amazon. It features a foreword by Bowie’s longtime producer Tony Visconti.

Bowie died in January this year aged 69 after battling cancer for 18 months. His death came just days after he released his Blackstar album.

Tony Visconti & Woody Woodmansey: The Man Who Sold The World