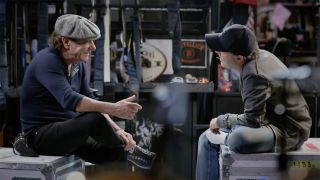 This weekend’s instalment of Brian Johnson’s Life On The Road features the AC/DC vocalist in conversation with Metallica’s Lars Ulrich.

It’ll be screened in the US through AXS TV on Sunday night (October 13) at 9pm EST, and in a clip from the episode, the drummer talks about touring with AC/DC in the early 90s and how much of an influence the rock giants had on Metallica when they were starting out.

Ulrich says: “You’ve got to remember, our musical roots were much more in AC/DC, Deep Purple and Led Zeppelin. We were much more blues-based, hard rock’n’roll stuff. We just started playing it a little faster as we went along.”

Reflecting on the two bands touring together in North America, Ulrich adds: “Playing with you guys on that run in 1991, which was the last time we really sort of supported anybody, we were in heaven getting a chance to be close to you guys and watch you every night for six weeks.”

Watch the full clip below.

Brian Johnson’s Life On The Road was originally broadcast in the UK in 2017.