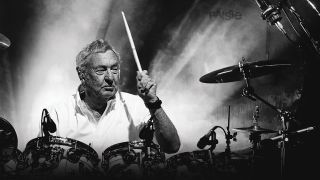 Nick Mason is to be lauded Prog God at the 2019 Progressive Music Awards. He’ll be presented with the coveted award at a star-studded ceremony on September 12 at London’s Underglobe Theatre. Previous recipients of the title include Steve Howe, Carl Palmer, Jon Anderson and Peter Gabriel.

“I’m all in favour of recognition for drummers – particularly when it’s me – so I’m really delighted to be recognised as Prog God,” Mason tells Prog. “It’s hard to believe that it was over 50 years ago that the music we know as prog rock was born, and it’s still being celebrated, played and developed in the 21st century. Long may it continue!”

Birmingham-born Mason helped found Pink Floyd with Syd Barrett, Roger Waters and Rick Wright in London in 1965. He was the only band member to have featured on all 15 of the band’s studio albums. His co-writing credits include some of their best-loved songs, Echoes, Time, and One Of These Days; his input has contributed to worldwide sales of more than 250 million records and, as a member of Pink Floyd, he was inducted into the Rock & Roll Hall Of Fame in 1996. Nine years later, he reunited with David Gilmour, Waters and Wright for Live 8, the show was to be the band’s last full concert.

Outside Pink Floyd, Mason has produced albums for Robert Wyatt, Gong and Steve Hillage, and enjoyed a number of side-projects. His well-documented love of motor racing surfaced on his 1981 solo album, Fictitious Sports, which included vocals from Wyatt. He also collaborated with 10cc’s Rick Fenn on four film soundtracks and 1985’s Profiles. Three of these solo releases appeared on last year’s box set, Unattended Luggage.

Following what appeared to be a period of inactivity, Mason briefly revisited Floyd’s back catalogue when he joined Ed Sheeran, Mike Rutherford and The Feeling’s Richard Jones for a live rendition of Wish You Were Here during the 2012 Olympics closing ceremony. His most recent studio recordings appeared on Pink Floyd’s final bow, The Endless River, in 2014.

Last year, he announced he would be exploring his former band’s early material with a new live project entitled Nick Mason’s Saucerful Of Secrets, featuring Spandau Ballet’s Gary Kemp, Guy Pratt, Lee Harris and Dom Beken. At the time of the announcement, the drummer told Prog, “I’d been ruminating on playing again rather than just talking about the old days, which I’ve done rather a lot of. It seemed like a good idea and it sounded as though we could actually find enough people committed to doing it. I think once we actually got some instruments and played together, I thought, ‘Oh yeah, this is fun and it could work!’”

Although the Saucers have toured the UK and Europe, Mason has previously confirmed he has no plans to head to the studio with any of the material.

“[These songs have] been recorded perfectly well by Pink Floyd some years ago. I think the fun of it is to try to be true to the music but actually not slavishly copy every detail of it,” he said at the time. “What I like is the idea of playing live and I’m really enjoying [revisiting the old material]. There are enough tribute bands to cover most of it, but this is very much a labour of love for me.”

The full list of winners from the Progressive Music Awards 2019 will be printed in our special souvenir issue, which goes on sale from October 25. You can keep up with all the gossip from the night via the Prog website.