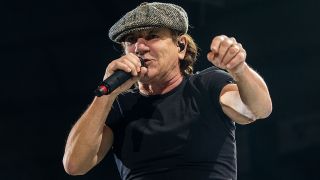 Brian Johnson’s A Life On The Road series is headed to US TV for the first time.

The show was originally broadcast on Sky Arts in the UK back in 2017, but now, US viewers will have the chance to see the AC/DC man interview some of the biggest names in music when it debuts on the AXS TV channel this Sunday (July 15).

The channel have acquired the first two seasons, which will see the vocalist chat to music icons about life on tour and revisit locations that have helped define their careers.

Johnson says: “To sit and chat with my friends and heroes while filming A Life On The Road was ridiculous fun, and with no professional journalists around, you can feel the trust."

Last month, Eagles guitarist Joe Walsh revealed he’s been working with Johnson on a mystery project, while Johnson is rumoured have rejoined AC/DC after leaving in 2016 due to hearing issues.