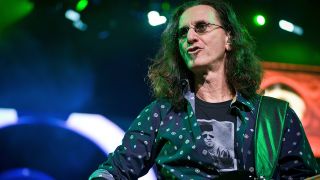 Fans attending The Claypool Lennon Delirium’s show in Toronto were given a surprise when Geddy Lee joined the band onstage.

The Rush bassist hooked up with Les Claypool and Sean Lennon for a cover of the Beatles’ Tomorrow Never Knows on Wednesday evening – and footage from the show can now be watched below.

Following the concert, Claypool said: “Last night was a pinnacle moment for this Ol’ Colonel’s career. My dear friend and childhood superhero Geddy Lee decided to join The Delirium onstage in Toronto for our rendition of Sean’s Dad’s Tomorrow Never Knows.

“As Geddy slinked out of the shadows with my Pachyderm bass in his mighty grips, the crowd slowly swelled to a frenzy of recognition. The energy and excitement was so palatable that it brought a joyful tear to my eye.

“Like Joe DiMaggio stepping back up to the plate, Geddy proceeded to show us all why he is one of the greatest to ever wield a four string piece of furniture. It was pure magic and I imagine I'll feel the tingle on the back of my neck for some time.

“Alas, our recording equipment went on the fritz so it will only live in our minds... and on the handful of cellphones that were fortunate enough to capture the glory. Good times.”

The Claypool Lennon Delirium are on tour in support of their latest album South Of Reality, which was released in February.

The Claypool Lennon Delirium: South Of Reality
Les Claypool and Sean Lennon return with their new album South Of Reality – the follow-up to 2016’s Monolith Of Phobosfeaturing the single Blood And Rockets.View Deal