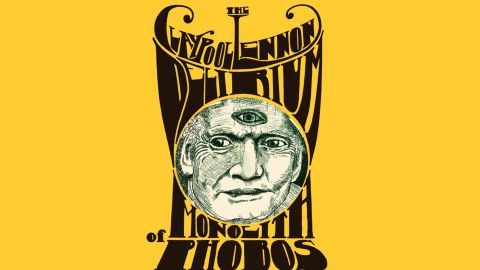 On their recent tour, The Claypool Lennon Delirium’s set included Astronomy Domine and Tomorrow Never Knows. It’s telling, and if Sean Lennon and Les Claypool seem an odd pairing on paper, on record they make perfect, proggy sense. Lennon’s psychedelic rock band Ghost Of A Saber Tooth Tiger toured with Primus last year, and he quickly bonded with their oddball-in-chief. They later convened at Rancho Relaxo, Claypool’s home studio compound in North California, to write and record this collaboration over a bottle of Pinot Noir or six.

Monolith Of Phobos doesn’t play like a wine album. As you might expect, we’re on a surreal, lysergic plane here. Bassist Claypool turns up in the puckish mode he revelled in on his recent Chocolate Factory outing. Multi‑instrumentalist Lennon, son of (obviously) John and (crucially) Yoko, is younger, even hipper and way more arty and earnest. Together, their musical confection is part Dahl, part Dalí, soaked in the cosmic, marshmallow-skied sounds of 60s psych, but with an arch, modern twist.

The title track is entertaining galactic guff, fading in on a reversed, looped bass note, like radio waves from a distant pulsar. Cue mellotron, celestial female voices, toy pianos and Lennon’s lovely, spacey slide guitar as, with trademark snark, Claypool tells a fabulous tale of a 2001-like monolith that ‘stares Buzz in the eye, it bids him question why we live or do or die’.

Lennon takes over on Cricket And The Genie: Movement I, The Delirium, an upbeat, off‑kilter tale about drug dependency. We’re in the Magical Mystery Tour era, with fuzzy bass and guitars, faux flutes and some throbbing, Hawkwindy space rock. Movement II, Oratorio Di Cricket contrasts with an ominous, low organ drone and the very Lennon père refrain: ‘You oughta try it, you really oughta try it.’

Sure, Sean Lennon sounds eerily like his dad in parts, but you feel he’s also a fan of The Beatles (and Zeppelin, Kurt Weill and Schoenberg). That’s cut with Claypool’s more detached, postmodern approach: his wiry, compressed bass sounds like Chris Squire’s in parts. As with Bigelf, Purson and Jellyfish, psychedelia is the palette, but the music goes beyond pastiche.

Over Boomerang Baby’s strummed 7⁄8 riff, Lennon sings a lament for a millennial girl who’s always bored but overstimulated: ‘She feels alone despite her many modern friendships and relations/It doesn’t matter what she knows, her phone enhances conversation.’ His post-Snowden, mid-Trump diatribe Ohmerica is even broader – ‘Think George Washington evolved from an ape? You should be locked up in the 51st state.’ Retro 60s keyboards, clangourous bass chords and a doomy forecast are seen out by a Seven Dwarves-style, ‘off to work we go’ outro.

Drawing on Arnold Layne, Taxman and The Who’s Fiddle About, the seedy tale of the voyeur Mr Wright fits Claypool’s acid presence well. ‘He sets up little cameras ’cos he likes to watch her dance, likes to watch her dance, puts a twitch into his pants’ (it gets more graphic). With an imaginative ebb and flow from Lennon’s guitar, it’s pretty creepy and very jaunty, as is Breath Of A Salesman. Here Claypool takes on a stalking fan: ‘I don’t want you to come talk to me, ponder my life philosophy/ Just leave me alone.’ It’s Rush’s Limelight for the Lollapalooza generation.

The whimsy can wear thin at times. Captain Lariat is a too-comical tune about a nitrous oxide-addicted dentist with a Sean Penn tattoo, though it’s saved by the kaleidoscopic Strawberry Fields Lennon harmonies. For all the Zappa and Sabbath references, Oxycontin Girl is less than the sum of its parts.

Yet the album closes on a fucked-up flourish. Lennon met Michael Jackson and his pet chimp Bubbles as a child, and this inspired …Phobos’ finest moment. Bubbles Burst tells the primate’s story, from its birth in 1983. The music is such a ride – imaginative, warped and ultimately melancholy, keying into human folly and the loss of innocence. The disturbing video, starring The Mighty Boosh’s Noel Fielding, nails the album’s Grand Guignol tone. Coda There’s No Underwear In Space then sets the controls for the outer edge of the cosmos.

A febrile, cartoon-colourful trip, Monolith Of Phobos is awash with sherbert lemonade froth with a bilious afterburn. Bright in cadence yet dark in theme, it’s the sound of two imaginations supercharged by each other’s company. Their strange, delicious fruit is well worth the taste.