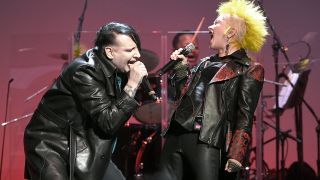 Earlier this week, Cyndi Lauper held her ninth annual Home For The Holidays charity concert at The Novo in Los Angeles.

Lauper was joined by a host of special guests on the night, including Jane’s Addiction frontman Perry Farrell, Henry Rollins, Marilyn Manson and The Offspring’s Dexter Holland

Fan-filmed footage from the concert has now appeared online showing Lauper dueting with Rollins on Black Flag classic Rise Above, while she also appears with Manson for The Beautiful People.

But before Manson kicks into the track, he gives the audience his unique take on Lauper’s 1983 smash hit Girls Just Want To Have Fun.

Check out the videos below.

All proceeds from the concert benefitted Lauper’s True Colors United charity, which helps fight homelessness in the US – and focuses especially on LGBTQ youth.