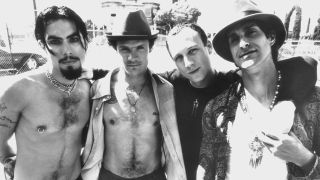 Alternative rock legends Jane's Addiction broke the alt-rock mould when they released their debut album, Nothing's Shocking, in 1989. With scant regard for LA's spandex-clad genre conventions, they turned rock'n'roll on its head by throwing elements of funk, goth and punk into the mix. With their follow up album Ritual De Lo Habitual, released in August 1990, they built upon that template and subsequently broke alt-rock to the masses.

Here, to mark Ritual De Lo Habitual's landmark 29th birthday, we look back at just what made the LA mavericks such an inspirational band.

Once upon a time a clearly defined system of cultural apartheid existed in order to keep rock fans divided into ideologically ‘pure’ factions. Much like choosing a sports team, an individual’s choice of musical tribe was deemed to be a legally binding, non-negotiable contract, which forbid any cross-pollination between metalheads, punks, classic rock fans, etc,. The idea of liking both Sabbath and Minor Threat, or Van Halen and Pink Floyd, was strictly verboten, promising chaotic, ruinous consequences for our entire musical eco-system. Jane’s Addiction said balls to all that, and permitted Led Zeppelin riffs, punk rock attitude, Velvet Underground-inspired artiness and shape-shifting, fluid prog rock experimentalism to exist within a single four minute song. The godless heretics!

They brought ‘Alternative Rock’ into the mainstream

There are those who believe that Nirvana changed the world in 1991, that the opening, jangling riff of Smells Like Teen Spirit issued in a new Year Zero for music, and instantly rendered the old gods obsolete. These people are fools. While Kurt Cobain was busily submerging his love of Kiss, Aerosmith, Zeppelin and Iron Maiden beneath a tsunami of Black Flag, Flipper and Scratch Acid seven inch singles, Perry Farrell, Dave Navarro, Eric Avery and Stephen Perkins were already subverting/perverting rock convention, blowing through Los Angeles in a whirlwind of dreadlocks and nose rings, flaunting drug addictions and insatiable pansexual urges.

A full 12 months before The Year That Punk Broke, Jane’s had broken into the Billboard Top 20 with Ritual do lo Habitual, scoring Modern Rock chart-toppers with Stop! and Been Caught Stealing. Rage Against The Machine guitarist Tom Morello nailed it when, in 2011, he noted: “Nirvana often gets credit for being the first ‘alternative’ band to break through, the band that changed music. That’s just not true. It was Jane’s Addiction: inspiring, intelligent, furiously rocking and artistically deep.”

They were more than just musicians

A true libertine and artist, JA frontman Perry Farrell believed in throwing down provocative challenges to conventional thinking. The cover of 1988’s Nothing’s Shocking album featured a lifesize sculpture of the singer’s girlfriend posing nude as conjoined female twins with their heads on fire. Nine of out America’s eleven leading record store chains refused to stock the album, forcing Warner Bros to issue the record in a plain sleeve. Undeterred, when it came time to deliver the artwork for the band’s third album, Farrell created another striking piece referencing a drug-fuelled, three day menage-a-trois he and his girlfriend had enjoyed with another free-spirited young lady. When US retailers objected once more, Farrell instructed his label to fashion an alternative cover, this one featuring his band’s name, the album title and the text of the First Amendment, enshrining freedom of artistic expression in constitutional law. Point well made.

They imported the idea of European festival culture to America

Following a trip to England’s Reading festival in the late ‘80s, Perry Farrell became obsessed with the idea of creating an ‘alternative’ travelling roadshow in the US, promoting ethical causes and consciousness-raising organisations in addition to showcasing music on the left of the dial. The result was Lollapalooza, a ground-breaking and hugely successful festival which established a new blueprint for festivals in the United States.

The inaugural line-up featured industrial rock newcomers Nine Inch Nails, funk-rockers Living Colour, British punk veterans Siouxsie and the Banshees, rapper Ice T and Texan underground noise mavericks Butthole Surfers alongside the headliners – a bill which attracted a hitherto largely ignored, but now newly enfranchised, ‘Alternative Nation’ from the margins of America’s youth cultures. Not a bad way for the band to sign off the first phase of their always colourful career.

For more on Jane’s Addiction, not least their debut studio album, Nothing’s Shocking, then click on the link below.