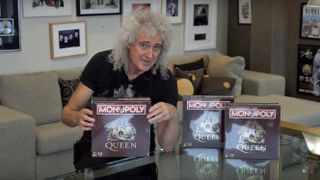 Brian May with Queen Monopoly

Brian May has released a video showing him unboxing the new Queen Monopoly board game.

The band’s version of the popular game came to light in March this year, with May highlighting the six unique payer tokens that come bundled with the game.

They reference Bicycle Race from 1978’s Jazz album, Hammer To Fall from 1984’s The Works, a vacuum cleaner from the I Want To Break Free video, a radio from classic track Radio Ga Ga, the robot from the cover of 1977 album News Of The World and one of May’s guitars.

May says of the project: “I think fans will be enchanted by the depth of detail in this special Queen edition of an already well-loved game.

“We have subtly morphed the traditional property-developing journey of Monopoly into the real-life adventure of a rock band on the road.

“Players will plot a whole career, based on developing bigger and better shows in venues all around the globe. Join us and conquer the world!”

Queen Monopoly will be released on June 23 and is available to pre-order via Queen’s online store.

May launched his new book Queen In 3D last month, which documents the band’s history through more than 300 stereoscopic photographs – the majority of which were taken by May himself – and viewable through his OWL viewer which comes with the publication.

The guitarist also recently released his new album with Kerry Ellis titled Golden Days and will head out on the road with Queen and Adam Lambert from November.