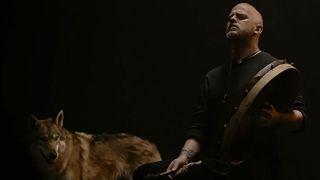 Norwegian folk proggers Wardruna have released a video for their brand new single Grá. The song is taken from the band's forthcoming new album Kvitravn, which will be released Music For Nations on June 5. You can watch the video in full below.

"Grá (Grey) is our song to the wolf. It seeks to address and acknowledge the cost and responsibility of being part of, and not above nature," Einar Selvik tells Prog. "Once again, we were given the opportunity to go to Finland and work with a beautiful and brave rescued wolf called Tihu and her caretakers. The video was directed by our friend Tuukka Koski and his fantastic team at Koski Syväri."

Kvitravn musically continues where the Runaljod trilogy left off, discussing Northern sorcery, spirit-animals, shadows, nature and animism, the wisdom and meanings of certain myths, various Norse spiritual concepts, and the relation between sage and songs.

The band have also announced that they will be supported by Jo Quail on the England and Ireland dates on their forthcoming European tour. Full dates below.