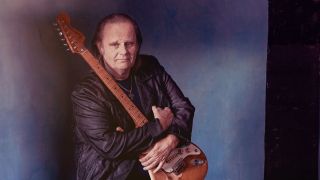 Blues legends Walter Trout and Joe Bonamassa have joined forces on the title track of Trout’s new album, We’re All In This Together. The album, which also features contributions from John Mayall, Randy Bachman, Kenny Wayne Shepherd, Charlie Musselwhite, Sonny Landreth, Warren Haynes and more, is the follow-up to 2015’s Battle Scars, and is released on September 1.

“On the original Full Circle album in 2006 [which also featured Bonamassa and Mayall], every cut was done live and we were in the studio together,” says Trout. “With this list of guests, I realised that was not gonna happen. But with this track with Joe, we did it live, looking at each other right in the face. What you are hearing is a first-take and the fire and the spontaneity are just raging. Joe and I were three feet away from each other in the same room as the band.

“Joe’s playing on here is completely stunning. I really believe we pushed each other to great heights, and when the song was done, we all just looked at each other and started laughing and I said: “wow, I think we just nailed it!” There was absolutely no need to record it again. Thank you, Joe for being so gracious and giving your very best to this project.”

“I’m 66 years old,” says Trout, “but I feel like I’m in the best years of my life right now. I feel better than I have in years physically. I have more energy. I have a whole different appreciation of being alive, of the world, of my family, of my career. I want life to be exciting and celebratory. I want to dig in. I want to grab life by the balls and not let go, y’know…?”

In June, Trout announced the album and released Do You Still See Me At All, which featured his son Jon on guitar. He followed it up last month with Gonna Hurt Like Hell, featuring Kenny Wayne Shepherd.

We’re All In This Together is released on September 1, and is available to pre-order now. Trout will tour the UK in October (dates below).

Walter Trout - We’re All In This Together album review