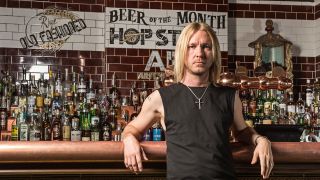 Back in the early to mid-90s, blues wasn’t a young man’s game. Then in 1995 a teenage guitarist from Shreveport, Louisiana named Kenny Wayne Shepherd released his debut album, Ledbetter Heights, and a serious shift in perception began. Musicians including Jonny Lang, Philip Sayce and Joe Bonamassa emerged, putting blues guitar on the radar of rock fans and younger listeners.

“People were paying attention, on a mainstream level,” Shepherd explains over coffee after our shoot in Shoreditch’s Blues Kitchen. “It was getting played on the radio, concerts of young blues players were selling out… there was suddenly a wave of interest in young people doing blues music.”

Now 39, Shepherd is returning to the UK after just a few (but popular) visits over the past decade.

He’s all about the blues, but does a lot with it.

“The ability to take blues in so many different directions is a testament to its significance in music,” Shepherd reasons, “because if you trace all popular music back to its origin, you’ll wind up with the blues. So you can take a bit from all these genres to allow you to take the blues into different directions.”

And so they did. Following 2014’s “traditional blues” record Goin’ Home, new album Lay It On Down offers a fresher look at the genre, stirring in elements of rock, country and R&B.

You can blame it all on Stevie Ray Vaughan.

Thanks to Shepherd’s dad being a local radio personality, Kenny grew up going to gigs and meeting celebrities backstage. When he was seven he met Stevie Ray Vaughan at one of them.

“I was so entranced that the whole world could have exploded and I wouldn’t have been aware,” he remembers. “From then on I wanted to learn to play guitar with that kind of passion and intensity.”

Shepherd was 13 when he signed his first record deal. His debut sold more than a million copies and his mainstream presence grew. Through his teens and early twenties he opened for an impressive roster of A-listers including Van Halen, Bob Dylan, the Rolling Stones and the Eagles.

“I was just like: ‘I can’t believe I’m getting to do this. Every time I go somewhere to play music, people are showing up! And they’re liking it!’” he recalls. “I was absolutely thrilled.”

…but he took control of his life.

At the age of 25, having seen friends suffer through rock’n’roll excess, Shepherd quit drinking. He hasn’t touched alcohol since.

“I just wanted to focus on the things that were important and try and fulfil my commitment to my family, my career, and not have anything stand in the way.”

God and family are important.

Not long after his decision to be sober, Shepherd converted to Catholicism – building on Christian, churchgoing roots in the religious south. After years of living in California, he’s brought his wife and their five children back to Louisiana.

Now is a great time for the blues.

“This is a fantastic time, I think, to be a musician in this genre,” he says. “If you look over the history of blues music, and most music that’s been around for a long time – with the exception of pop music, because it’s popular for a specific amount of time before they move onto the next thing – it’s cyclical and it always has these surges in popularity. And I think we’re experiencing that right now. So I’m glad to be a part of it.” ****

Lay It On Down is released on July 21 via Provogue/Mascot Label Group. The Kenny Wayne Shepherd Band play Ramblin’ Man Fair in Maidstone on Saturday, July 29

Kenny Wayne Shepherd - Lay It On Down album review