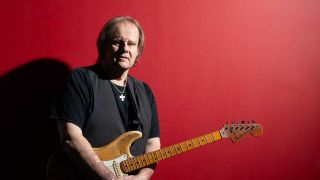 Blues icon Walter Trout has announced the release of Ordinary Madness, the follow-up to 2019's album of cover versions, Survivor Blues. It'll be released via Provogue Records on August 28, and is available to pre-order now.

The album was completed days before lockdown in the US, and its themes of shared troubles chime with current events.

“There’s a lot of extraordinary madness going on right now,” says Trout. “This album started because I was dealing with the flaws and weakness inside me. But it ended up being about everyone."

Trout has also released the first single from the Ordinary Madness, Wanna Dance.

“The whole place is full of vintage gear, and it’s all there for you, whatever you want," says Trout. "The keyboard that Ray Manzarek used in The Doors? It’s just fucking sitting there.

"I remember, on the rhythm track for OK Boomer, Michael Dumas, who runs the studio, comes walking in and says: ‘Here’s the SG that Robby used in The Doors – wanna try this?’ Then, for the rhythm guitar on Heartland, he says: ‘Here’s one of James Burton’s Paisley Telecasters.’"

Despite some health experts claiming that live shows may not return before 2021, Trout remains positive about taking the songs on the road.

“Sometimes you have to see through the darkness to find the light," he says. "I can’t wait get back out there again, meet the people at shows, hug them and pose for a photo. And I’m really looking forward to playing these songs live. Because I think this album speaks to these times.”