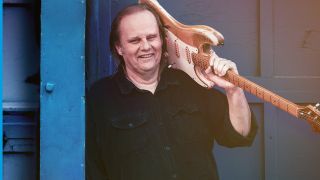 Walter Trout has announced that he’ll release a covers album in early 2019.

The vocalist and guitarist will launch Survivor Blues on January 25 via Provogue/Mascot Label Group, with Trout explaining why this won’t be a run-of-the-mill covers record.

He says: “I’m riding in my car sometimes, and I’ve got a blues station on – and here’s another band doing Got My Mojo Workin’. There’s a little voice in me that says, ‘Does the world need another version of that song?’

Trout adds: “My idea was to do these songs like me, to arrange them for my band and style – not to just copy the originals note-for-note.”

To mark the announcement, Trout has released his take on the Jimmy Dawkins track Me, My Guitar And The Blues, which can be listened to below.

Trout has a number of tour dates coming up, including a show in Newcastle tonight.

Walter Trout: Survivor Blues
Walter Trout delves into a collection of old and obscure blues tracks and puts his unmistakable spin on them - including a cover of the Jimmy Dawkins track Me, My Guitar And The Blues.View Deal