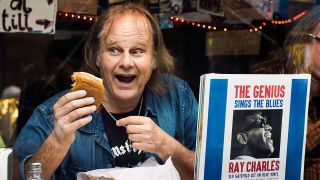 Ambient techno is not the most obvious soundtrack for record shopping with blues guitarist Walter Trout, a man whose on-stage guitar pyrotechnics and off-stage antics – the latter culminating in his near-death from liver failure in 2013 – genuinely warrant the epithet ‘legendary’. Still, that’s what’s on the stereo at Sister Ray on Berwick Street in Soho, and Trout is nothing if not game.

“Pet Shop Boys and Soft Cell,” he says, pretending to rifle excitedly through the synth-pop section. “That’s the real me.” Suddenly he’s distracted by something even more mouth-watering. “Now for some krautrock,” he jokes, heading for the 70s German proto-electronica section. “A little Tangerine Dream, maybe…”

Trout is on good form today – very good, in fact, for a man who almost died. Far from the emaciated, harried figure circa 2014, he looks robust, swaggering about the shop in his hooded black anorak like Liam Gallagher’s friendly uncle from New Jersey.

While some people who’ve cheated death retreat into themselves, Trout couldn’t be more open, embracing every experience with almost childlike glee. Take today’s Record Store Challenge, for which he has been given £50 to spend on his vinyl of choice. He couldn’t be more engaged. Gags in which he feigns interest in unlikely genres aside, he’s not going to waste a single penny on anything but music of the finest vintage.

“There’s a Ray Charles album I’d love to find,” he says, his gregarious bark clearly audible over the shop’s somnolent electronica, as he eagerly flicks through the pioneering American singer/composer’s records. And, despite its relative rarity, there is a copy. He seems quite moved.

He clutches lovingly The Genius Sings The Blues and reminisces about life in white suburbia – Ocean City, New Jersey – in the 50s, where his parents were fans of Charles as well as BB King, John Lee Hooker, John Coltrane and Mississippi John Hurt. His father would take him to black jazz clubs in Atlantic City, his mother escorted him to concerts by Duke Ellington, Count Basie and Ella Fitzgerald.

“It’s going to be hard to get through this,” he says, continuing his story, misty-eyed. “They had this album, and I remember walking in one day and one of the songs was playing, and my mum was crying. I said: ‘What’s the matter, mum?’ I was about five years old. She said: ‘That song…’ I haven’t seen the album since.”

His childhood with his carpenter dad and teacher mum sounds idyllic, almost genteel. My use of the ‘g’ word makes him laugh out loud. There was nothing genteel about it, especially after his parents divorced when he was seven and both got remarried to people he describes as “mentally ill”. His stepfather’s issues were understandable: he had been a Japanese prisoner of war and had been tortured. Hardly surprising, then, that he came home from World War II with post-traumatic stress disorder, at which point he was told to “be a man and suck it up”. But he had other coping strategies in mind.

“He’d get drunk and try to murder my [elder] brother and me with a hatchet,” Trout recalls. “He’d chase us around, chop down the door of the bedroom, and my brother would hold him off with a shotgun. We’d jump off the porch and go sleep in the woods.”

Life wasn’t much more tranquil at his dad’s place in Philadelphia, where he lived with his new wife.

“Oh god, she was fuckin’ nuts,” he says. “I remember her one time, she comes out of her bedroom naked and she’s waving a forty-five [handgun] and she goes: ‘I’m gonna kill myself!’ And my dad said: ‘Stop.’ And she said: ‘Don’t try to stop me.’ And he says: ‘No, I was just gonna show you how to turn off the safety on the gun.’”

So, not very genteel, then.

“It was insanity. If it hadn’t been for music, I’d have ended up in a mental hospital.”

Spotting the Todd Rundgren section reminds him of the time he bought a Byrds album from the teenage Runt, who was working behind the counter at Jerry’s Records in Philadelphia and a budding blues guitarist himself. A Laura Nyro album prompts another recollection – of the strange day when Trout, aged 16, ran away to Greenwich Village in an attempt to find the darkly confessional singer-songwriter, with whom he’d fallen in love after seeing her on TV. “I walked around for hours looking for her because I wanted to ask her to marry me.”

As we loiter by the jazz and blues sections, he remembers his first musical hero – Al Jolson – and also his mum taking him, aged 10, backstage to meet jazz legend Duke Ellington.

From the age of six Trout played trumpet, and joined the school band. This was partly to avoid Physical Education class, where he was bullied by the “jocks” because of his hair, which was long because of The Beatles – he’d become infatuated after seeing them on the Ed Sullivan show.

“It was February ninth, 1964, eight p.m. on Sunday night, Channel 2 CBS in Philadelphia,” he recalls, remembering the precise moment history was made for young America. “It was seismic for my generation.”

When Trout was 10 he’d been given an acoustic guitar, but seeing The Beatles made him crave an electric one. His new direction was confirmed after his brother introduced him to the Paul Butterfield Blues Band album.

“I’d never heard blues played with that fire and aggression, that fast and at that volume,” he gasps. “It said on the back: ‘Play it loud.’ So my brother and I cranked it up, and it was like, ‘Holy shit!’ From the age of fourteen, I knew: ‘This is what I’m gonna do.’”

When Trout was 16 he formed his first band, Wilmont Mews, who played cover versions of Beatles, Stones and Santana songs. He soon found himself competing with a wannabe star on the local circuit.

“Bruce Springsteen was in his band Steel Mill at the same time as us, and we’d play these clubs with two stages, one on either side of the room,” he remembers. “As soon as one band stopped the other would start. I remember being drunk and telling him I didn’t think he was all that good on guitar. He said something like: ‘I’m writing songs’, and I said: ‘I hope they’re good, cos you’re not much of a lead player.’”

In 1974, Trout moved to Los Angeles, where he joined a country band who had a residency at a club called Gazzarri’s on Sunset Strip.

Around this time he became a drug dealer. Or as he puts it, “a fucking big-time dope gangster”. Apart from running errands, such as driving Gregg Allman to the methadone clinic for treatment and sorting out local pop stars, he was involved in a major way in the importing of cocaine, heroin and opium. To facilitate his business, he fell in with a couple of smugglers.

“Basically, I met a girl and she took to me, so I moved in with her,” he explains. “And she was in business with those guys.”

It was all going well, until one day there was a knock at the door from two men in suits. They were FBI agents.

“They said: ‘Hi, Walter, we just want you to know we arrested your friends, Daulton Lee and Christopher Boyce, for espionage. We’re watching you.’”

He fled to Huntington Beach, although to say the episode put him off fast living would be an exaggeration. He spent the next decade – even as he began his career, first as a sideman for Percy Mayfield, Joe Tex and John Lee Hooker and then as a member of Canned Heat and John Mayall’s Bluesbreakers – pursuing women, drink and drugs with some vigour. Which of those appealed most?

“That’s a hard question,” he replies. He did everything, including injecting heroin: “Whatever means of ingestion were available, I’d go for it.”

He spent “a couple of houses’ worth” on getting wasted; the mid-70s passed in a narcotic blur, his desire to numb the senses a hangover from his troubled upbringing. Not that it worked.

“No, because as soon as the dope wore off the pain was still there,” he says. He gave up smack around seventy-five, following his run-in with the Feds, but carried on caning the coke and booze until the late eighties. That’s when the realisation finally hit: “I needed to confront the things that had hurt me in the past, not escape them.”

Two people saved Trout’s life: Carlos Santana, who 30 years ago encouraged him to give up drink and drugs; and the anonymous liver donor who allowed doctors to operate on him in 2014. Without both, Trout would now be dead.

“It all seems like a bad dream,” he says of the period when he was diagnosed with cirrhosis, as he makes his last few unexpected purchases at Sister Ray today: the debut album by Curtis Mayfield, Big Star live and Tim Buckley’s Goodbye And Hello. “I was completely gone mentally and physically. I didn’t recognise my wife and kids, I had brain damage, I couldn’t talk, I lost a hundred and twenty pounds. I was in bed for eight months.”

Trout has gone from enfeebled to enthused – as he says: “I’m so alive now.” True enough – the night before this interview, he played an astonishingly vital set at Under The Bridge in London.

He might have just released a new album – We’re All In This Together, a series of collaborations including Joe Bonamassa and Eric Gales – but he’s already primed to write the next one.

“I’m imbued with energy, creativity, gratefulness and passion,” he beams. “I’m like a different human being to what I was four or five years ago. I’m bursting. I could literally sit down in the next week and write you a new album. I feel fucking great.”

It’s been quite a journey. How does he plan to celebrate his 50th anniversary as a performer, in two years’ time?

“I’ll go out and play a gig somewhere,” he decides as he heads to the counter with his purchases. “I’ll keep gigging till I can’t gig any more. I’m inspired by guys like John Mayall, who’s eighty-three and still does two hundred shows a year. I would love to make it to that age and be out there, giving it everything I got.”

We’re All In This Together is out now via Mascot.

Walter Trout - We’re All In This Together album review

Walter Trout: "I would put on a British accent and pretend to be John Mayall"