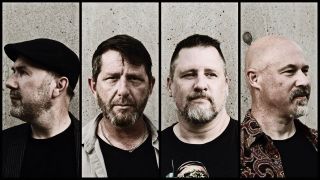 US prog rock quartet Valdez have changed their name to Tribe Of Names. The change has been brought about due to the departure of keyboard player Joe Cardillo, who has used the Valdez name had used previous to the band forming.

"With the arrival of guitarist Karl Eisenhart in January of this year, followed by the departure of long time keyboard player, Joe Cardillo in May, the band Valdez is turning the metaphorical page to become Tribe Of Names," explains singer Simon Godfrey.

"We’re still very much the same band of silly bastards at heart but the name Valdez was something keys-man Joe Cardillo had been using for years and out of respect for his tenure with the moniker, we decided it was best to leave that name behind and find one of our own."

"We’re looking to put out a new album through Bad Elephant Music in 2021 but until then, we’ll see you, your food and your pets, on the internet," laughs Godfrey. "All of us in Tribe Of Names wish you happiness and unlimited access to excellent foot massages."