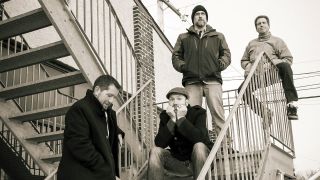 Think of Philadelphia and you might – if you passed school geography – recall The City Of Brotherly Love on America’s East Coast. Images of their famous Liberty Bell (or, at least, strains of the Monty Python theme music) might flood your mind. Film fans might conjure scenes from its movies: Trading Places, or those incredible training montages featuring Philly’s favourite fictional son, Rocky Balboa.

Music fans might remember that Philly gave birth to Stan Getz, Hall And Oates and, er, Disco Biscuits, among many others. And if you fancy a bit of weird, you’ll remember that mainstay of urban myths, the ‘Philadelphia Experiment’ in which a massive WW2 ship was rendered invisible.

The City Of Brotherly Love has claimed a new son since he moved there back in 2014: Tinyfish and Shineback main man Simon Godfrey. His very own ‘Philadelphia Experiment’ has worked out magnificently. His ‘Letters from America’ feature for Prog’s website became mini- classics – love letters to the differences between the music scenes of the US and the UK. Philly is home now. Surely part of the reason for that lies in Godfrey’s new US-based band, Valdez.

When we catch up with him and Valdez confederate Tom Hyatt (erstwhile bassist for US proggers Echolyn), the weather on the Atlantic East Coast is, it’s fair to say, a little British. Hyatt suggests that, “If the weather were an ice cream, it would be at best vanilla.”

When asked how things are in the US, Hyatt says, “Americans hate each other right now.” Quickly he adds, “Fortunately I have some cool bandmates who think like I do.”

Perhaps that’s why Valdez seem so timely. In addition to Godfrey and Hyatt, Valdez has Cold Blue Electric’s Joe Cardillo on keys and Stone Jack Baller’s Scott Miller on drums. All four musicians have each been in the business for decades. This is a band with nothing to prove. Scott Miller is on record as joking: “It’s not a supergroup. We’re just four guys repaying our debt to society like the parole officer told us to.”

There’s much on Valdez’s debut This to get Godfrey’s Tinyfish and Shineback contingent excited. It conjures, by turns, the sass and grind of 70s The Who, while being unafraid of 15-minute slabs of prog. Godfrey’s heavier Tinyfish sound has been refined into a very bluesy and jazzy groove. Thematically the seriousness is still there (Godfrey doesn’t shy away from exploring dementia and divorce), but the album’s concept – to dare to celebrate the moment – shines bright. Godfrey has travelled 3,000 miles and seems to have rediscovered himself.

Indeed, he acknowledges that the East Coast has freed him from being boxed in. “The lines between genres in the USA are much less rigid,” he says. “That level of flexibility and eclecticism has rubbed off on me. And the 70s are not a bad thing over here.”

With characteristic wit and quotability, he adds, “All my favourite bands are from the 60s and 70s… apart from Joe Dolce.”

This resurrection is a cause for celebration. Godfrey’s struggles with tinnitus are well-documented. They led to a retirement from live work in 2012. With brutal honesty, Godfrey admits, “When I stopped, I thought that could be the end of my musical career.”

But… whisper it… Godfrey has been playing live again, and Valdez have a small US tour planned for the summer. They might even make it over to Europe in 2018.

“Tinnitus is unique to every sufferer,” says Godfrey. “It’s very dependent on diet and stress and sleep, as well as the physical injury. Moving to the US improved the condition immensely… it’s still there, but I’ve learnt to manage it to the point where I can work again in a live setting.”

Inevitably, this raises questions about the future of Tinyfish. Godfrey’s assessment is honest. “None of us would ever say never. But circumstances are against us.”

Guitarist Jim Sanders is based in Sweden, while drummer Leon Camfield is touring the world with The Simon & Garfunkel Story. Bassist Paul Worwood has pretty much retired from music. “I always love the idea of Tinyfish coming together but right now it looks unlikely,” Godfrey admits.

If Tinyfish are past, Valdez offer a promising future. The band’s chemistry is impressive. Arguably the Hyatt-Godfrey friendship is prog’s new bromance. Hyatt tells of how they met. “Simon’s wife and I have been friends for a long time. She said he was a big fan of my band Echolyn.”

Over a long night of yacking in a Philly comedy club, Valdez was born. Laughing raucously, Hyatt says, “Simon is one of the most adorable people you could ever meet. He had me out of my pants in half an hour.”

Godfrey responds, “I remember my wife’s eyelids drooping and eventually saying, ‘Get a room.’ It snowballed from there.”

As to whether Valdez are ‘prog’, Godfrey and co are relaxed. “We didn’t start out with a manifesto,” he says. “We just want to make the best kind of songs we possibly can. If we capture an audience of dub reggae fans, then so be it.”

Neither he nor Hyatt are bothered by trying to be clever or technical. As Godfrey sums up, “I’d rather be Van Morrison than Van Halen.”

Of course, when it comes to friendship, Godfrey and Tinyfish/Shineback collaborator Rob Ramsay’s relationship is outstanding. Godfrey is expecting a second album of Shineback work and, in the meantime, has contributed to Ramsay’s forthcoming solo release. Godfrey is fulsome in his praise for Ramsay’s lyrical gifts. “Rob is the other half of me as a songwriter. I love what he writes.”

The Valdez debut has an expansive take on Ramsay’s and Godfrey’s old Tinyfish song, Driving All Night. It seems made for America’s expansive spaces. “Bridging the divide is a subtle theme throughout This,” says Godfrey.

With Valdez he seems to have bridged the physical and musical distance between his English roots and American home. With a smile in his voice, he says: “We didn’t want to approach these songs in a masculine way, but a more human way. It’s about the human condition, rather than spaceships and trolls.”

This is out now on Bad Elephant. See www.facebook.com/valdezrock for more information.