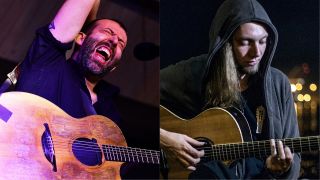 The UK Guitar Show has announced the names of the final two artists who will play on the main stage this weekend.

The event will take place at London’s Olympia on September 29 & 30 and is brought to you by the organisers of the London Drum Show and the London Bass Guitar Show and is run in association with with MusicRadar, Guitarist, Total Guitar, Guitar Techniques and Louder.

Now we can reveal that Jon Gomm and Mike Dawes will also take to the stage on the Sunday.

Gomm is a singer/songwriter who uses his acoustic guitar to create drum sounds, bass lines and twisting melodies simultaneously. His two-handed guitar style produces an array of unique sounds and you’ll be able to see his show at 5pm on the Sunday.

Dawes, meanwhile, has been hailed as one of the finest and most creative modern fingerstyle guitar performers. His solo material has chalked up more than 50 million hits online, and, since the launch of his debut album in 2013, he has averaged 150 concerts per year.

Dawes will take to the stage at 11am on the Sunday morning.

Tickets are now on sale. Want to know more? Here are seven reasons why you simply can’t miss this year’s UK Guitar Show.