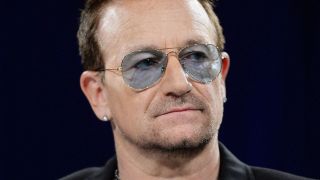 U2 frontman Bono has revealed his trademark shades are a result of chronic eye condition glaucoma.

Bono appeared on the BBC’s Graham Norton show on Friday night, where he explained the reason he is never seen without his sunglasses.

He said he had been battling the condition for 20 years. It makes eyes more sensitive to light.

Bono said: “This is a good place to explain to people that I’ve had glaucoma for the last 20 years. I have good treatments and I am going to be fine.”

Pressure behind the eyes causes glaucoma, which can lead to blindness if not treated. Early diagnosis can prevent further damage to sight, through surgery, eye drops and laser treatment.

U2 have been under fire in recent weeks for their decision to automatically upload new album Songs Of Innocence to iTunes users’ devices.