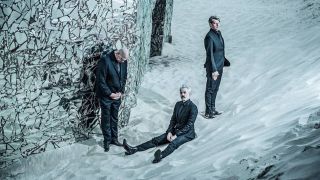 Belgian rockers Triggerfinger have announced that their upcoming album, Colossus, will be released on August 25 on Mascot Records. It’s the follow-up to 2014’s By Absence of the Sun, and is preceded by a video for Flesh Tight, the second track on the album.

“The basic ingredients for Flesh Tight were written pretty quickly, says mainman Ruben Block. “More or less one flow, connecting the driving guitar-strum and struttin’ beat with the “flesh-tight-feelings” image. They stuck to each other. I preferred flesh tight opposed to skin tight because it sounded more… fleshy. There’s something uplifting, yet private and personal in the words.”

The video for Flesh Tight is also quite… fleshy. And it features a gang of marauding swimwear models with something of a penchant for sidearms.

“For the video we were very happy we could work with Pieter Van Hees and his team,” adds Block. “He’s a very cool Belgian movie and television director who, in his field always practiced an out of the ordinary, very personal approach. He created his own spin on what the lyrics and music brought him. And that’s just the start. Everyone should feel free to connect whatever images they want to it. Maybe the most important journeys are the ones we make in our minds.”

Following several years of tour dates with the likes of Red Hot Chili Peppers, The Rolling Stones, Within Temptation, Thin Lizzy, Clutch, Big Sugar and Therapy? and an in-ring performance at Vladimir Klitschko’s heavyweight title defence against Tony Thompson in 2012, the band needed to take a step back.

“We wanted to get out of the rat race for a while” says Block. “The first step was doing a few collaborations with other musicians that would kick us out of our comfort zone. It made us look at our songs in a different way. The second step was building our own little studio where we could work and wail 24⁄7. All amps on 10 at two in the morning? No problem! But there was more to it than sheer volume. The previous albums were all built on roaring energy and the live interaction between the three of us. That was not our main concern anymore. This time the song would be king. ‘Anything goes’, that was our motto. Acoustic instruments, samples, keyboards, percussion, two bass guitars: as long as they served the song, we were happy.”

“This must be the boldest thing we’ve ever done”, Block says. “We’ve been fans of Mitchell Froom’s work for a long time, but working with your heroes can be a dangerous thing. Mitchell proved to be comforting and challenging at the same time. He opened so many doors for us, and with Colossus he put us on track for the next few years.”

Triggerfinger are playing some festival dates this summer (see below).

Introducing Black Mirrors: Belgium's answer to every band out there