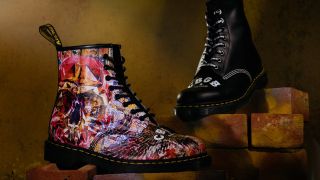 Widely regarded as the place where punk got its foothold – yeah, pun intended – in US counterculture in the 70s and 80s, now-defunct New York venue CBGB saw generations of underground bands develop and thrive.

Though the venue's been closed since 2006 thanks to New York's rapidly rising rents – sound familiar? – UK shoemakers Dr Martens have joined forces with the brand with a view to helping it "keep its radical legacy alive".

As is often the way with Dr Martens collabs, they've produced designs to suit all tastes, no matter how flamboyant those tastes may be.

For those who prefer their footwear a little more conservative, while still sticking it squarely to the man, Dr Martens have produced the first of two limited edition boots. The boots are black aside from the CBGB & OMFUG lettering on the vamp and lettered laces to match.

The second – or as DMs put it, for "the punks, the misfits and the gormandizers" – are printed with graffiti inspired by CBGBs walls themselves. They also have CBGB & OMFUG lettering. Be warned: they're pretty flippin' jazzy.

Check out both shoe designs below. Head to the Dr Martens site to get your hands on a pair.