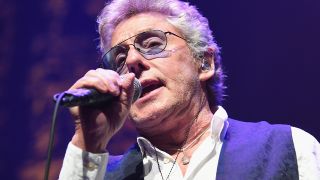 Roger Daltrey slammed some of the fans attending The Who’s show at New York’s Madison Square Garden on Monday evening for smoking marijuana.

The singer is allergic to pot smoke and has complained to audience members about lighting up during the band’s shows previously.

And at the end of this week’s concert at the iconic NYC venue, Daltrey blasted some fans close to the front of the stage for ruining his night.

He said: “I’ve got to tell you, all the ones smoking grass down the front here, I’m totally allergic to it.

“I’m not kidding. Whoever it is down there, you fucked my night. I’m allergic to that shit and my voice just sucks up, so fuck you!”

The Who’s next stop on their Moving On! tour will take place on May 16 at Nashville’s Bridgestone Arena.

The band will then return to England on June 6 for a special show at London’s Wembley Stadium where they’ll be joined by Pearl Jam's Eddie Vedder and The Kaiser Chiefs.

Last week, it was confirmed that Daltrey would release the Tommy Orchestral album to mark the record’s 50th anniversary.

Roger Daltrey: Tommy Orchestral
Roger Daltrey and his band played a landmark live set in upstate New York last summer, showcasing The Who's classic album Tommy with a live orchestra. This is not to be missed.View Deal