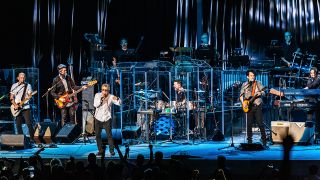 The package combines shows from Bethel Woods – the site of the original Woodstock – with Daltrey and his band joined by the Hudson Valley Philharmonic Orchestra, while the rest of the album features performances from Budapest with The Budapest Scoring Orchestra.

Tommy Orchestral will be released on July 14 on CD, 2LP and on digital and streaming platforms via Polydor and has been planned in celebration of the original record’s 50th anniversary.

Daltrey says: “Pete Townshend’s music is particularly suited to being embellished by the sounds that an orchestra can add to the band.

“Tommy can mean whatever you want it to mean. I use the characters in it as metaphors for parts of the human condition, so it’s a kind of a story of the human spirit.

“Even though it is 50 years on, I approach it as though I'm singing it for the first time.”

To mark the album announcement, a stream of Pinball Wizard from the performance has been released and can be listened to below.

The Who, meanwhile, are currently on tour across North America on the first leg of their Moving On! tour.

The band will then return to England on July 6 for a special show at London’s Wembley Stadium where they’ll be joined by an orchestra.

Roger Daltrey: Tommy Orchestral
Roger Daltrey and his band played a landmark live set in upstate New York last summer, showcasing The Who's classic album Tommy with a live orchestra. This is not to be missed.View Deal