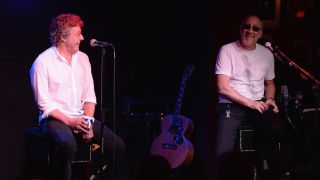 The Who have announced a UK tour to celebrate the band's 50th anniversary.

Billed as The Who Hits 50, the tour will start in Glasgow on Sunday, November 30, before taking in another eight UK arenas.

The band promise the shows will include music spanning their entire career including The Who By Numbers and My Generation, as well as less well-known material. Guitarist Pete Townshend describes the show as “hits, picks, mixes and misses.”

Townshend adds: “A lot of our hard-nosed, hard-line, long-term fans are always trying to get us – by sending emails and going to the website – to try to get us to play songs that are in the back catalogue that they would love to hear us play. So there is just a slim possibility that there might be a few of those in the mix.

“We’re hoping that there will be a few nice surprises for people that have seen us many times over the years.”

Townshend and frontman Roger Daltrey performed a short acoustic set as part of today’s press conference. They played Substitute, Bargain, The Kids Are Alright and Won’t Get Fooled Again.

The pair also confirmed that new material could be in the offing, with Townshend saying he recently gave Daltrey three new demo tracks. He adds: “Happily, he likes them so we’re thinking of trying to get into the studio this summer.”

Tickets on sale from 9am on Friday, July 4 at AEG Live.