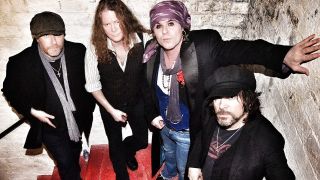 The Quireboys have announced that they’ll celebrate the 30th anniversary of their debut album A Bit Of What You Fancy with a UK tour.

The run of 13 shows will get under way at the Bullingdon in Oxford on December 10 and wrap up at the Sage in Gateshead on February 13.

The Quireboys will play the album in its entirety, with tickets going on general sale this coming Friday (June 5) at 10am. Australian outfit Massive will support.

A Bit Of What You Fancy featured tracks including 7 O’Clock, Whippin’ Boy, I Don’t Love You Anymore, Hey You and There She Goes Again, with the band also revealing they’re re-recording the album with a release date set for July 1.

Frontman Spike says: “A Bit Of What You Fancy is where it all began for the Quireboys. It was an incredible album that launched our career. However, the way we sound and play now doesn’t do it justice.

“Henceforth, it has been a pleasure updating it to our modern-day Gypsy Rock & Roll Sound. I’m sure everyone will enjoy this new version in all its glory, marking its 30th anniversary.”

A Bit Of What You Fancy 30th anniversary edition will also feature two live bonus tracks: Man On The Loose and Mayfair and the album is now available to pre-order.